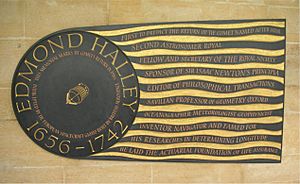 He was also a mathematician, meteorologist, and physicist. Halley is best known for computing the orbit of the comet named after him: Halley's Comet.

On leaving Oxford, in 1676, Halley visited the south Atlantic island of St. Helena and set up an observatory with a 24-foot-long (7.3 m) telescope which had no tube.

He used the telescope to study stars from the Southern Hemisphere. He later published Catalogus Stellarum Australium which was about the 341 southern stars.

In 1686, Halley published the second part of the results from his St. Helena expedition. This was a paper and chart on trade winds and monsoons. He thought solar heating caused atmospheric motions. He also established the relationship between barometric pressure and height above sea level. His charts were an advance in how to display information visually. Halley also persuaded Sir Isaac Newton to publish a book about his discovery of gravity.

In 1690, Halley built a diving bell, a device in which the atmosphere was replenished by way of weighted barrels of air sent down from the surface. In a demonstration, Halley and five companions dived to 60 feet in the River Thames, and remained there for over an hour and a half. Halley's bell was of little use for practical salvage work, as it was very heavy, but he made improvements to it over time, later extending his underwater exposure time to over 4 hours.

That same year, at a meeting of the Royal Society, Halley introduced a rudimentary working model of a magnetic compass using a liquid-filled housing to damp the swing and wobble of the magnetized needle.

In 1691 Halley sought the post of Savilian Professor of Astronomy at Oxford University. As he was well known as an atheist, he was opposed by the Archbishop of Canterbury, John Tillotson. The post went instead to a mathematician who had the support of Isaac Newton.

In 1693 Halley published an article on life annuities (a kind of pension), which featured an analysis of age-at-death on the basis of the Breslau statistics Caspar Neumann had been able to provide. This article allowed the British government to sell life annuities at an appropriate price based on the age of the purchaser. Halley's work strongly influenced the development of actuarial science. The construction of the life-table for Breslau, which followed more primitive work by John Graunt, is now seen as a major event in the history of demography.

These are generally either rhyming with valley, or "Hailey", though some people will use Halley's supposed pronunciation of his own name "Hawley". The "Hailey" pronunciation inspired the rock and roll singer Bill Haley to call the rest of his band his "Comets" after Halley's Comet.

All content from Kiddle encyclopedia articles (including the article images and facts) can be freely used under Attribution-ShareAlike license, unless stated otherwise. Cite this article:
Edmond Halley Facts for Kids. Kiddle Encyclopedia.