A diving bell was an early system for underwater diving. The basic idea of a bell is that a hollow object, even with an open bottom, will hold air when put under water (this can be seen with a glass in a sink). If the bell is heavy enough it will sink below the water. A swimmer can be inside the bell and breath, or hold his breath and swim outside the bell for a short time, and come back to the bell to breath again. The idea had been around for a long time, but became useful in the 1600s. Scuba diving has mostly replaced diving bells although they are still used sometimes. 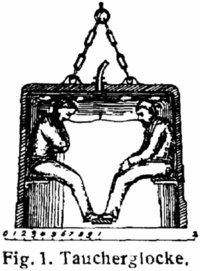 Diving bells are used as underwater search vessels and by working divers doing underwater work and salvage. The bell is lowered into the water by cables from a crane attached to a ship or dock. The bell is ballasted so as to remain upright in the water and to be negatively buoyant so that it sinks even when completely full of air.

A similar principle to that of the wet bell is used in the diving helmet of standard diving dress, where compressed air is provided to a helmet carried on the diver's shoulders. Additional weights are carried on the waist and feet to prevent overturning. The modern equivalent of this diving equipment is used in surface supplied diving.

A wet sub may also provide a dry viewing chamber for the operator's head, acting as would a diving helmet.

The physics of the diving bell applies also to an underwater habitat equipped with a moon pool, which is like a diving bell enlarged to the size of a room or two, and with the water–air interface at the bottom confined to a section rather than forming the entire bottom of the structure.

Structure of a typical wet bell 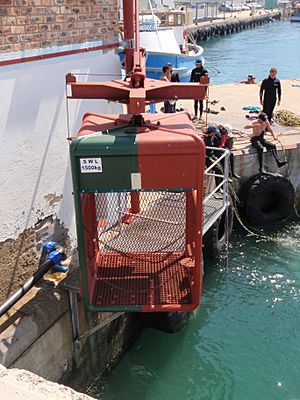 A wet bell is a platform for lowering and lifting divers to and from the underwater workplace, which has an air filled space, open at the bottom where the divers can stand or sit with their heads out of the water. The air space is at ambient pressure at all times, so there are no great pressure differences, and the greatest structural loads are usually self weight and the buoyancy of the air space. A fairly heavy ballast is often required to counteract the buoyancy of the airspace, and this is usually set low at the bottom of the bell, which helps with stability. The base of the bell is usually a grating or deck which the divers can stand on, and there will be racks to hang the divers' umbilicals, which for this application must not be buoyant. Other equipment that is carried on the bell include cylinders with the emergency gas supply, and racks or boxes for tools and equipment to be used on the job. A gas panel inside the bell is supplied by the bell umbilical and the emergency gas cylinders, and supplies the divers' umbilicals and sometimes BIBS sets. Folding seats may be fitted for the divers' comfort during ascent, as in-water decompression may be long.

Structure of a typical closed bell

A closed or dry bell is basically a pressure vessel for human occupation which is lowered into the sea to the workplace, equalised in pressure to the environment, and opened to allow the divers in and out. These functional requirements dictate the structure and arrangement. The internal pressure requires a strong structure, and a sphere or spherical ended cylinder is most efficient for this purpose. When the bell is underwater, it must be possible for the occupants to get in or out without flooding the entire interior. This requires a pressure hatch at the bottom. The requirement that the bell retains its internal pressure when the external pressure is lowered dictates that the hatch opens inward, so that internal pressure will hold it closed.

Locking onto a decompression chamber at the surface is possible either from the bottom or the side. Using the bell bottom hatch for this purpose has the advantage of only needing one hatch, and the disadvantage of having to lift the bell up and place it over a vertical entry to the chamber.

The bell bottom hatch must be large enough for a large diver fully kitted with appropriate bailout cylinders, to get in and out without undue difficulty, and it can not be closed while the diver is outside as the umbilical is tended through the hatch by the bellman. It must also be possible for the bellman to lift the working diver in through the hatch if he is unconscious, and close the hatch after him, so that the bell can be raised and pressurised for the ascent. The internal space must be large enough for a fully kitted diver and bellman to sit, and for their umbilicals to be stowed neatly on racks, and the hatch to be opened inwards while they are inside. Anything bigger will make the bell heavier than it really needs to be, so all equipment that does not need to be inside is mounted outside. This includes a framework to support the ancillary equipment and protect the bell from impact and snagging on obstacles,and the emergency gas supply, which is usually racked around the framework and connected via manifolds to the internal gas panel. The bell umbilical is connected to the bell via through hull fittings (hull penetrations), which must withstand all operating pressures without leaking. The internal gas panel connects to the hull penetrations and the diver's umbilicals. The umbilicals will carry main breathing gas supply, a communications cable, a pneumofathometer hose, hot water supply for suit heating, power for helmet mounted lights, and possibly gas reclaim hose and video cable. The bell umbilical will usually also carry a power cable for internal and external bell lighting. Hydraulic power lines for tools do not have to pass into the interior of the bell as they will never be used there, and tools can also be stored outside. There may be an emergency through-water communications system with a battery power supply.

The bell may also have viewports and a medical lock.

Deployment of a modern diving bell 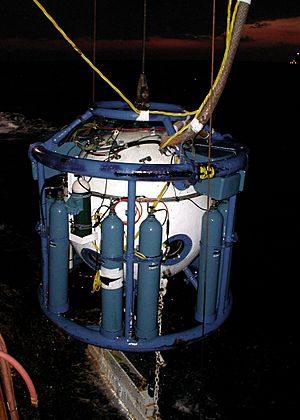 Diving bells are deployed over the side of the vessel or platform using a gantry or A-frame from which the clump weight and the bell are suspended. On dive support vessels with in-built saturation systems the bell is deployed through a moon pool. Deployment usually starts by lowering the clump weight, which is a large ballast weight suspended from a cable which runs down one side from the gantry, through a set of sheaves on the weight, and up the other side back to the gantry, where it is fastened. The weight hangs freely between the two parts of the cable, and due to its weight, hangs horizontally and keeps the cable under tension. The bell hangs between the parts of the cable, and has a fairlead on each side which slides along the cable as it is lowered or lifted. Deployment of the bell is by a cable attached to the top. As the bell is lowered, the fairleads prevent it from rotating on the deployment cable, which would put twist into the umbilical and risk loops or snagging. The clump weight cables therefore act as guidelines or rails along which the bell is lowered to the workplace, and raised back to the platform. If the lifting winch or cable fails, and the bell ballast is released, a positively buoyant bell can float up and the cables will guide it to the surface to a position where it can be recovered relatively easily.

The bell umbilical is separate from the divers' umbilicals, which are connected on the inside of the bell. The bell umbilical is deployed from a large drum or umbilical basket and care is taken to keep the tension in the umbilical low but sufficient to remain near vertical in use and to roll up neatly during recovery. 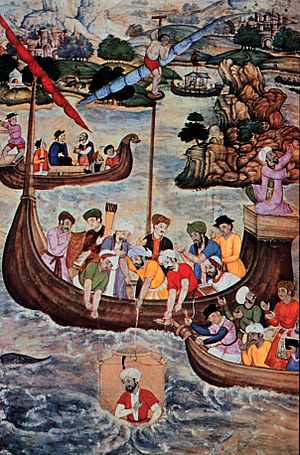 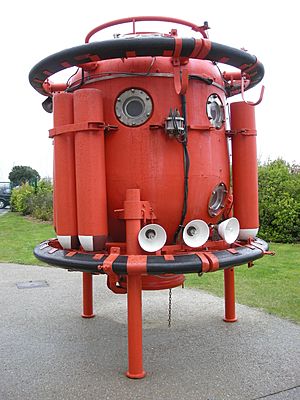 The diving bell is one of the earliest types of equipment for underwater work and exploration. Its use was first described by Aristotle in the 4th century BC: "...they enable the divers to respire equally well by letting down a cauldron, for this does not fill with water, but retains the air, for it is forced straight down into the water." According to Roger Bacon, Alexander the Great explored the Mediterranean on the authority of Ethicus the astronomer. In 1535, Guglielmo de Lorena created and used what is considered to be the first modern diving bell.

In 1687 Sir William Phipps used an inverted container to recover £200,000-worth of treasure from a Spanish ship sunk off the coast of San Domingo.

In 1689, Denis Papin suggested that the pressure and fresh air inside a diving bell could be maintained by a force pump or bellows. Engineer John Smeaton utilized this design in 1789.

The earliest applications were probably for commercial sponge fishing. A diving bell was used to salvage more than 50 cannons from the Swedish warship Vasa in the period immediately following its sinking in 1628.

In 1691 Edmond Halley completed plans for a diving bell capable of remaining submerged for extended periods of time, and fitted with a window for the purpose of undersea exploration. In Halley's diving bell, atmosphere is replenished by sending weighted barrels of air down from the surface.

Once when asked to give a lecture, Salvador Dalí showed up in a diving bell, and insisted on speaking from inside it.

The diving bell spider, Argyroneta aquatica, is a spider which lives entirely under water, even though it could survive on land.

Since the spider must breathe air, it constructs from silk a diving bell which it attaches to an underwater plant. The spider collects air in a thin layer around its body, trapped by dense hairs on its abdomen and legs. It transports this air to its diving bell to replenish the air supply in the bell. This allows the spider to remain in the bell for long periods, where it waits for its prey.

As noted above, further extension of the wet bell concept is the moon-pool-equipped underwater habitat, where divers may spend long periods in dry comfort while acclimated to the increased pressure experienced underwater. By not needing to return to the surface they can reduce the necessity for decompression (gradual reduction of pressure), required to avoid problems with nitrogen bubbles releasing from the bloodstream (the bends, also known as caisson disease). Such problems can occur at pressures greater than 1.6 standard atmospheres (160 kPa), corresponding to a depth of 6 metres (20 ft) of water.

Commercial diving operators now generally use the hyperbaric chamber, a more modern type of sealable diving chamber based on a pressure vessel which is pressurised by an air pump rather than by the ambient water pressure. These have safety advantages and allow decompression to be carried out after being raised to the surface and taken back to base on a diving support vessel. They are used especially in saturation diving and undersea rescue operations. However this kind of diving chamber is often used in conjunction with a separate diving bell, or may be connected via an airlock to another compartment which uses the diving bell principle for access to the water.

All content from Kiddle encyclopedia articles (including the article images and facts) can be freely used under Attribution-ShareAlike license, unless stated otherwise. Cite this article:
Diving bell Facts for Kids. Kiddle Encyclopedia.