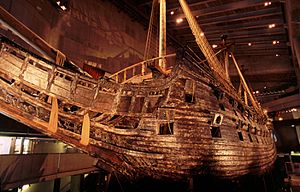 Vasa in the Vasa Museum and seen from the bow (front).

Vasa was a big Swedish warship. The ship was built from 1626 to 1628. The same year Vasa was ready outside Stockholm, but sank by accident on her maiden voyage (first trip). Vasa sank because she was too heavy on top. Those who built her knew that she had problems, but they didn't dare say that to the Swedish king Gustavus Adolphus. He was not in Sweden when Vasa was built and he wanted her to go fight in the Thirty Years' War as soon as possible. There was a hearing about why Vasa sank, but no one was found guilty or judged for her sinking.

Swedish divers in diving bells brought up some of Vasa's cannons from the sunken ship in the 1660s. Anders Franzén found Vasa in 1956 after he had read about the ship in sources and looked for her in the water around Stockholm. The ship was brought up in 1961 and was then treated with special chemicals so that it would last for a long time. The preservation treatment took almost 20 years to complete. Vasa is now in the Vasa Museum in Stockholm, Sweden. It is a very popular place for tourists to visit. It gets more than one million visitors every year.

When Vasa was brought up there were thousands of things inside her. There were bones of people, clothes, weapons, tools, coins, food and even some of the sails. The things and Vasa have been very good for historians, because they helps them understand how it was in Sweden in the 1600s. Vasa was a very expensive ship and was one of the largest in the world. She had hundreds of sculptures, and they were painted in many colors. She was a symbol of how powerful Sweden wanted to look and how good the Swedish king was.

All content from Kiddle encyclopedia articles (including the article images and facts) can be freely used under Attribution-ShareAlike license, unless stated otherwise. Cite this article:
Vasa (ship) Facts for Kids. Kiddle Encyclopedia.