Port and starboard facts for kids 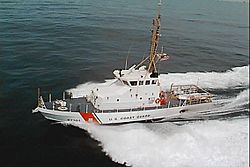 Port side view of the US Coast Guard ship Barracuda

The term starboard comes from the Old English steorbord, meaning the side on which the ship is steered. Before ships had rudders on their center-lines, they were steered with a steering oar at the stern of the ship. Because more people are right-handed it was placed on the right-hand side. The term is similar to the Old Norse stýri (rudder) and borð (side of a ship). Since the steering oar was on the right side of the boat, it would tie up at wharf on the other side. For this reason the left side was called port.

Formerly larboard was used instead of port. This is from Middle English ladebord and the term lade is related to the modern load. Larboard sounded very similar to starboard and in 1844 the Royal Navy ordered that port be used instead. Larboard continued to be used well into the 1850s by whalers. In Old English the word was bæcbord, which is used in other European languages, for example as the German backbord and the French term bâbord (derived in turn from Middle Dutch). 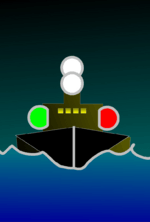 At night, the port side of a boat or aircraft is indicated by a red navigation light at the bow. The opposite side of the bow has a green one to help avoid collisions. The International Regulations for Preventing Collisions at Sea state that a ship on the left must give way to a ship on its right. If the courses of two boats are intersecting, the helmsman usually gives way to a red light by going around the stern of the stand-on vessel (the vessel that does not need to change course). A saying for this is:

"If to starboard red appear,
'tis your duty to keep clear...
Green to green, red to red
perfect safety, go ahead."

All content from Kiddle encyclopedia articles (including the article images and facts) can be freely used under Attribution-ShareAlike license, unless stated otherwise. Cite this article:
Port and starboard Facts for Kids. Kiddle Encyclopedia.