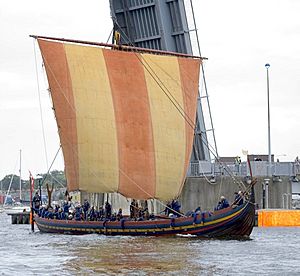 The Sea Stallion arriving in Dublin. It is the worlds largest reconstruction of a Viking Age warship. The original ship was built at Dublin c. 1042. It was used as a warship in Irish waters until 1060.

Longships were seagoing vessels made and used for trade, exploring, and raiding. They are usually thought of as Viking ships but were used by early people on the Baltic Sea and the North Sea. It was the Vikings who mastered the design of light fast longships that could also go up rivers. At the beginning of the Anglo-Saxon period in Britain, the invading groups of Angles, Saxons, Frisians and Jutes arrived in longships. From that time on longships were also being built and used in the British Isles. When the Normans conquered England in 1066, William the Conqueror used a large fleet of longships to transport his army to England.

A Model of the Hjortspring boat from the German Museum in Munich.

The earliest discovered longship built from planks traces back to c. 350 BC. The ship was recovered from the Hjortspring bog in southern Denmark. Called the Hjortspring boat it was made of planks of wood sewn together with cord. The spaces between planks were filled with resin. The ship was about 59 feet (18 meters) long and was a very light and flexible design. It had a double bow and stern that looked like a bird's beak. The ship had places for 20 men to row and had a steering oar at both ends. A replica of this design was built and tested. It was very seaworthy, fast and maneuverable. In calm waters it averaged 6 knots (about 7 miles per hour) in speed. 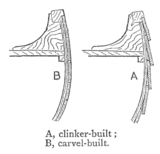 The next design was of clinker-built construction (also called lapstrake). In this design overlapping boards are held together with nails. Named the Nydam ship for being found in the Nydam bog in 1863 in south Jutland. It measured 77 feet (23.5 meters) long, a little over 11 feet (3.5 meters) wide and was about 4 feet (1.2 meters) deep. This ship was sunk (and filled with weapons) between 350–400 AD. Unlike the Hjortspring boat, the planks are held together with nails (the tips being bent over). It did not have a mast, as later designs would, it had places for 30 men to row. It also did not have a keel. This kind of shallow open ship could cross open sea but could be swamped (filled with water) and sink. This was a classic Northern design that in different forms could range as far as Constantinople or Newfoundland.

The Viking designed longship could cross an ocean or could row up a shallow river. Over time the design changed. There were many different types of longships built for different purposes. The smallest ships were the Faering (four oars) and Sexaeringer (six oars) used around the fjords to move people and for fishing. 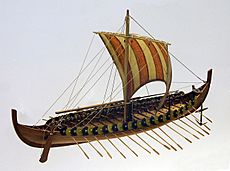 Model of the Gokstad ship.

Longships of from 12 to 32 oars were called Karvi. The Gokstad Ship is a famous ship of the Karvi type. The Gokstad ship was excavated in 1880. Its mast was cut off but otherwise the ship was well preserved. It was 76 feet (23 meters) long and 17½ (5.3 meters) wide. The Gokstad ship had a keel and was made of oak. Its rudder was about 11 feet (3.3 meters) long; big enough to steer the ship in any weather. The mast stood about 40 feet (12 meters) tall.

A replica of the Gokstad ship sailed across the Atlantic ocean in 1893. 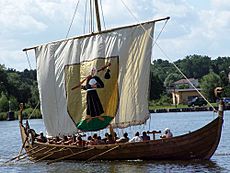 A specialized type of ship with at least 20 rowing benches was called a snekkja, meaning 'thin and projecting.' It was a warship known to be used by both Swedish Vikings and Wends. It could carry 44 men and 2 horses. Snekkjas were one of the most common types of warship. Duke Ratibor of the Wends had 660 of this type of ship he used when he attacked Kongälf in 1135.

Skeid (skeið), meaning 'that which cuts through water,' ships were larger warships. Skeids usually had more than 30 rowing benches. These were the largest longships ever discovered. They had armour over the oar ports (openings for the oars) protecting the men rowing. King Aethelred of England ordered this type of ship to be made throughout England. Every district of 310 hides was to provide one such ship. 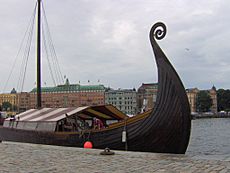 A Drakkar ship in Stockholm.

The largest warships of the era were of the Drakaar (dragon) type. King Olaf I of Norway had a famous longship of this design called Long Serpent. King Olaf II of Norway had a longship named Visunden (the Ox). It had an Ox head carved in the prow. Matilda of Flanders had a ship built for her husband William the Conqueror of the Drakkar design. It was named the Mora and was built at Barfleur in Normandy in the summer of 1066. This type could operate in shallow water and was easy to beach.

Many of this type of ship were called Knarrs. From the 9th century larger sailing ships were used for overseas trading. Many were specialized cargo ships. They were marked by having a small crew, few oars, and depended on sails for power. They had a large load capacity for a variety of cargo. An example would be the Klåstad ship. It was built in the last years of the 10th century. The ship was wrecked near Kaupang in Norway. It had a capacity of about 13 tons and a length of 69 feet (21 meters).

Another form of cargo ship was the horse transports used by William the Conqueror in 1066. In the ship list it gives a total of 776 vessels in the Conqueror's fleet. Many were for the knights and soldiers but others were used to haul the supplies and horses they needed. Earlier Vikings did not use horse transports and usually used the horses they found in the places they invaded. The Normans, however, used cavalry and needed to transport their war horses and palfreys. But the Normans in Sicily had used horse transports (1060–61) before possibly based on Byzantine ships of a similar design. The Byzantines had ships called hippagogoi designed to land horses which could go right into battle. Guy of Amiens observed that William's invasion force included men from Apulia, Calabria, and Sicily. William had shipbuilders familiar with building horse transports at his disposal. How many he built is unknown, but he did have such ships in his fleet.

All content from Kiddle encyclopedia articles (including the article images and facts) can be freely used under Attribution-ShareAlike license, unless stated otherwise. Cite this article:
Longship Facts for Kids. Kiddle Encyclopedia.