Olaf I of Norway facts for kids 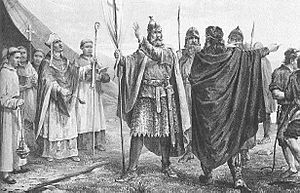 Olaf was the son of king Tryggve Olafsson of Norway and grandson of Harald Fairhair, the first king of all Norway. According to tradition, Gunhild, wife of Eric Bloodaxe, wanted him killed. Instead he and his mother were sold as slaves. When they were freed, he ended up in Russia where he grew up. He commanded the mercenary troops of Vladimir the Great in Kiev. In 985 he led his Vikings through the Baltic Sea in a raid on the British Isles. He won the Battle of Maldon in 991. He and Sweyn Forkbeard, the two leaders, received a payment from the English of 10,000 pounds (4,500 kg) of money (in gold and silver). According to the Anglo-Saxon Chronicle, he accepted the Christian faith just after a failed attack on London in 994. Rich, newly converted and with many followers, he decided to return to Norway to spread Christianity.

In the autumn of 995 he arrived in Norway. He was accepted as King and began the process of converting the people to the new Christian faith. Olaf did this by force. He looted and burned pagan temples. He forced entire communities to become Christian or die. However, many of his pagan subjects chose death over giving up their beliefs. Finally, in the year 1000, his enemies joined forces, attacked and killed him at a place named "Svolder".

All content from Kiddle encyclopedia articles (including the article images and facts) can be freely used under Attribution-ShareAlike license, unless stated otherwise. Cite this article:
Olaf I of Norway Facts for Kids. Kiddle Encyclopedia.