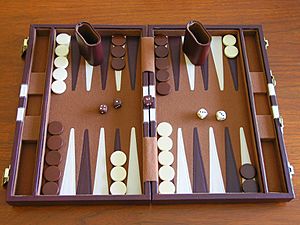 A backgammon board, with pieces and dice

Backgammon is a game played by two players. Each player moves pieces around a board. Players roll two dice to find out how far their pieces can move in one turn. The winner of one game is the first to get all pieces all the way around, and off, the board.

White moves from white's far right to white's home area on white's close right, in the shape of a right-hand "C" from white's point of view. Black moves along the same "C", beginning from black's far left and ending at black's home area on black's close left. (The "C" is the same for both sides - the "C" points to the right for white and points to the left for black.)

As shown in the image, some pieces (for each side) begin already in the home quadrant, and some pieces must make their way all the way around. Pieces can be sent backwards to their starting position during play.

The roll of two dice introduces a random component in the game, but Backgammon is basically a game of strategy.

Usual playing time is around 15– 30 minutes, for a single game (which could be thought of as something like one particular long "hand" of a card game). An overall championship or round of backgammon involves a number of ongoing single games, with the involvement of points, a "doubling cube," and other complications.

The game has a long history. Games that resemble it have been played for thousands of years. Archaeologists doing excavations at a place called Burnt City in modern-day Iran have found parts of a game that resembled backgammon. They have found 60 pieces to play with, and two dice. They could show that the game utensils date from around 3000 BC. These pieces around 100–200 years older than another set, found in Ur, in Mesopotamia.

All content from Kiddle encyclopedia articles (including the article images and facts) can be freely used under Attribution-ShareAlike license, unless stated otherwise. Cite this article:
Backgammon Facts for Kids. Kiddle Encyclopedia.