Haggerston is a locale in East London, England, centred approximately on Great Cambridge Street (now renamed Queensbridge Road). It is within the London Borough of Hackney and is considered to be a part of London's East End. It is about 3.1 miles (5 km) northeast of Charing Cross.

The adjacent neighbourhoods are Dalston (to the north), Hoxton (to the west) and Bethnal Green (to the south east). Haggerston historically formed part of Shoreditch borough, and was divided into the following ecclesiastical parishes: All Saints, St Chad, St Columba, St Mary, St Paul, St Augustine, and St Stephen.

In 1965, the Metropolitan Borough of Shoreditch became part of the new London Borough of Hackney. There is an electoral ward called Haggerston within the borough. In the 1990s a number of the area's more rundown housing estates were refurbished and some disused public buildings were privately converted into gated communities. In 2010, Haggerston Railway station re-opened, a little to the north of the original station. 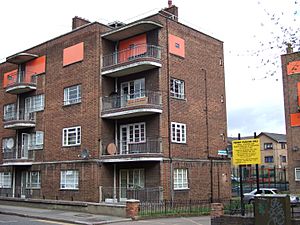 Haggerston is first recorded in the Domesday Book as Hergotestane, possibly of Viking origin, and an outlying hamlet of Shoreditch. On Rocque's 1745 map of Hackney, the village is shown as Agostone but by the 19th century it had become Haggerstone, and part of the growing urban sprawl, with factories and streets of workers' cottages lining the canal.

The proximity to Hoxton and Shoreditch has made the area popular with students and workers in the creative industries, as these nearby areas have grown more expensive. In recent years, escalating property prices have driven commercial art galleries further into east London, which has exacerbated this effect. For the same reason, Haggerston has been attracting tech start ups over Silicon Roundabout in Old Street, with some people calling the area "Hackerston".

A shortage of secondary school places has made the area less attractive to families but this is likely to change with the building of a City Academy on Laburnum Street.

Many Vietnamese, Cambodian and Laotian people have formed communities in Haggerston and nearby Shoreditch. Outside the area, the most visible sign of this is the profusion of Southeast Asian restaurants on nearby Kingsland Road in Shoreditch and on Mare Street in Hackney. There is also a notable Russian community focused on bars and cafés along Kingsland Road. 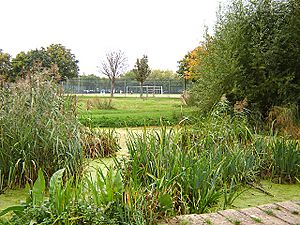 The Grade II listed Haggerston Pool, designed by Alfred Cross and opened in 1904, was closed in 2000. In June 2009, after a long community campaign, a £5m grant was announced from the Department for Children, Schools and Families to refurbish and re-open the pool. The building would also contain community facilities and a GP surgery.

Haggerston School is a Grade II listed building, designed by the modernist architect Ernő Goldfinger and built in 1964–65.

This area of Hackney has a long association with clowning. Holy Trinity Church still hosts an annual clowns' service to commemorate Joseph Grimaldi and All Saints Centre at one time housed the Clowns Gallery and Museum, including props and a unique collection of painted eggs, serving as the 'registration' of clowns' make-up. Much of the collection is now on display at Wookey Hole. Other Anglican churches in Haggerston are All Saints, Haggerston Road; St Columba, Kingsland Road; and Sts Mary and Chad, Nichols Square. The Little Sisters of Jesus have had a community of sisters within Fellows Court, Haggerston, since 1990. 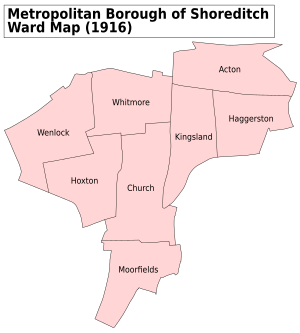 A map showing Haggerston ward of Shoreditch Metropolitan Borough as it appeared in 1916.

The Haggerston electoral ward forms part of the Hackney South and Shoreditch constituency.

The ward returns three councillors to Hackney Council, with an election every four years. At the election on 6 May 2010, Ann Munn, Jonathan McShane, and Barry Buitekant, all Labour Party candidates, were returned. Turnout was 54%; with 5,006 votes cast. 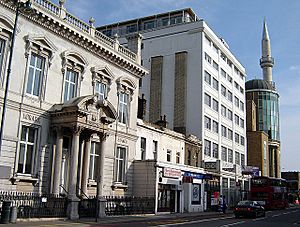 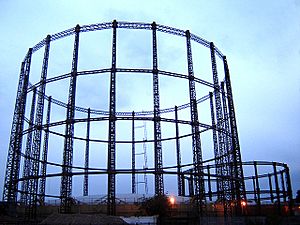 Gasometers at Haggerston Gasworks, view from the Regent's Canal, October 2005

The Regents Canal towpath is easily accessible to pedestrians and cyclists. It provides access to Victoria Park to the east and Islington to the west.

The condemned Haggerston and Kingsland Estate was scheduled for demolition in the 1990s but the process did not get underway for another 20 years. In 2009 the artists Andrea Luka Zimmerman and Lasse Johansson, who lived on the Haggerston Estate on Dunston Road, created the I AM HERE project, placing on the building large portrait photographs of the current estate residents who were about to be moved out so the building could be demolished. These faced the Regent's Canal and were popular with passersby. The project came down in April 2014.

A feature film Estate, a Reverie (83mins, Zimmerman) about the Haggerston estate was completed in 2015. Filmed over seven years, Estate, a Reverie reveals and celebrates the resilience of residents who are profoundly overlooked by media representations and wider social responses. The film was nomoinated for several awards, including the 2015 Grierson awards.

On the Kingsland Estate in Whiston Road, Egyptian painter Nazir Tanbouli created the "King's Land" project where, in the space of 4 months, he covered all of the buildings of the condemned estate with murals. The Kingsland Estate was demolished in late 2013.

For details of education in Haggerston, see List of schools in the London Borough of Hackney.

Secondary schools in the area include Haggerston School and The Bridge Academy.

All content from Kiddle encyclopedia articles (including the article images and facts) can be freely used under Attribution-ShareAlike license, unless stated otherwise. Cite this article:
Haggerston Facts for Kids. Kiddle Encyclopedia.