Hackney Central is the central district of the London Borough of Hackney in London, England.

The area is focused on Mare Street and the retail areas to the north of it. As such it extends north from Regent's Canal, takes in most of Broadway Market and follows each side of Mare Street till it terminates in the vicinity of Hackney Central railway station. The area also includes the central retail area which extends from Hackney Downs railway station in the west to the Hackney Walk Outlet Village, on Morning Lane, to the east.

Hackney Central is the area that once would have been known as Hackney Village. This was a place that flourished from the Tudor period, when principal members of the Court had their houses in the surrounding area, and King Henry VIII of England had a palace (located near the modern Lea Bridge Road roundabout). Hackney Central remained a popular resort for Londoners until the end of the Georgian era, when this suburb of London began to be completely built up. Railways, trams and factories brought an end to Hackney's rural atmosphere during the Victorian era, and its fortunes declined.

The industries of nearby Homerton and the Lee Valley have largely disappeared, leaving the NHS and local council as the largest employers. Successive waves of immigrants, both from abroad and within the United Kingdom, make modern Hackney a culturally vibrant part of inner London, with both the benefits and challenges that this brings.

Extensive post-World War II redevelopment replaced much of the housing stock, but the Georgian housing and Victorian terraces that remain have become popular again. 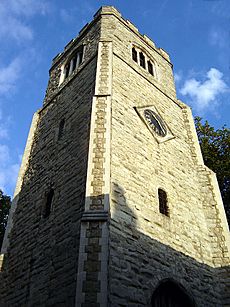 St Augustine's Tower. Dating back to the 13th century, this is Hackney Central's oldest building. It is all that remains of the original medieval parish church, which was demolished in 1798 (September 2005)

In 1727 Daniel Defoe said of the villages of Hackney

All these, except the Wyck-house, are within a few years so encreas'd in buildings, and so fully inhabited, that there is no comparison to be made between their present and past state: Every separate hamlet is encreas'd, and some of them more than treble as big as formerly; Indeed as this whole town is included in the bills of mortality, tho' no where joining to London, it is in some respects to be call'd a part of it.

This town is so remarkable for the retreat of wealthy citizens, that there is at this time near a hundred coaches kept in it; tho' I will not join with a certain satyrical author, who said of Hackney, that there were more coaches than Christians in it.

In Roman times Ermine Street passed to the west of what is now Hackney Central. The land was covered with open oak and hazel woodlands, with marshland around the rivers and streams that crossed the area. Hackney lay in the Catevallauni tribal territory.

The name Hackney derives from a 5th or 6th century Saxon settlement known as Haca's ey – or raised ground in marshland. The settlement was near Hackney Brook, and was probably on the higher ground around the later St Augustine's Tower. Hackney is not mentioned by name in the Norman Domesday Book; at that time it formed a part of the manor of Stepney.

Little remains of early Hackney, except the Tudor St Augustine's Tower, which survives as Hackney's oldest building; and the positively medieval road network. The churchyard, Hackney Brook, and the surrounding villages prevented Hackney's expansion, and by 1605 the village had a lower rateable value than the other divisions of the parish. In Tudor times there were a number of fine houses along Church Street, but many Tudor courtiers lived in nearby Homerton. On the site of Brooke House college, in Clopton was sited one of Henry VIII's palaces, where his daughter Mary took the Oath of Supremacy. Her guardian was Henry's Principal Secretary of State Ralph Sadleir, a resident of Bryck Place, Homerton.

A further cluster of houses existed in medieval times, where Well Street enters Mare Street. The Loddiges family founded their extensive plant nursery business on open ground to the north-east of here in the 18th century.

By 1724, while still consisting of a single street, there is an unbroken line of buildings, except by the churchyard and by the brook, with large gardens behind for the finer houses and inns. The 16th-century church, despite galleries being installed, became too small for the needs of the parish, and parliament was petitioned in 1790 for a modern larger church to be built. This began in 1791 on a field to the north east of the old church, but was bedeviled by builders' bankruptcies and not finally completed until 1812–13 when the tower and porches were added. Further disaster struck in a fire of 1955. In the churchyard stands the tomb of Francis Beaufort, deviser of the Beaufort wind force scale; and that of John Hunter, the second governor of New South Wales, Australia. The Loddiges family also has a tomb in the churchyard and memorials within the church. The parish burial register records the death of "Anthony, a poore old negro, aged 105" in 1630. This is all that is known of Anthony, the first recorded black resident of Hackney. 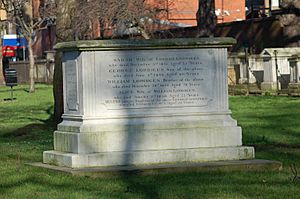 The villages of Hackney, Lower Clapton and Homerton remained separated by fields into the 19th century. The fine houses remained, with large gardens behind. Artisans and labourers lived in cottages established in these gardens. There was not the room, or the will, for major rebuilding in the village. By 1800, St Thomas' Square, a Georgian square was laid out on the southern end of Mare Street. By the 20th century, these buildings had declined and were replaced with public housing. An early 18th-century mansion, now the New Landsdown Club, but once the headquarters of Elizabeth Fry's British Ladies' Society for Promoting the Reformation of Female Prisoners remains at 195 Mare Street. It is Grade II* listed, but in poor condition and on the English Heritage register of buildings at risk. In neighbouring Homerton, (to the east of the churchyard) Sutton Place was built by 1806, near Sutton House.

The rebuilding of the Church, on a field to the north of the village, altered the course of the road and allowed the establishment of Clapton Square in 1816, in nearby Lower Clapton. Much of the area to the north and east of the churchyard now forms the Clapton Square Conservation Area, designated in 1969. 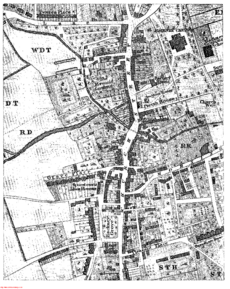 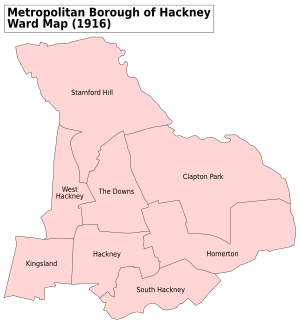 A map showing the Hackney ward of Hackney Metropolitan Borough as it appeared in 1916.

During the Victorian era, many of the old buildings were swept away and the estates broken up to form streets of terraced housing. The change from rural suburb to firmly urban, was marked by the arrival of the railway in 1850, with a great iron rail bridge crossing Mare Street. Trams began to make their appearance on the streets in the 1870s, and a tram depot opened in 1882 on Bohemia Place.

Increased access and the culverting of Hackney Brook in 1859–60, brought about the present road layout. Many older buildings were pulled down to intensify development and to make room for street widening and the railway. In 1802 the parish vestry hall on the Narrow Way was rebuilt. In 1900 it was re-faced in stone and given a pediment inscribed 'Hackney Old Town Hall'. A new town hall was built on a different site in 1866; it was in turn superseded by today's Town Hall, built in 1937. By the turn of the 20th century, only St Johns Gardens, and Clapton Square, the areas around the 1791 church, remained as public open space.

Hackney Central is the conventional geographical core of Hackney, and in fact, before the 1899 London County Council reorganisation, it was what many would have understood to be Hackney, although the term Hackney Proper was often used to distinguish it from other local settlements such as South Hackney, West Hackney and Hackney Wick.

However, in terms of parish boundaries, until 1835 the areas of Hackney Proper, Homerton, Upper and Lower Clapton, Dalston, De Beauvoir Town, Stamford Hill, and Kingsland all constituted the Parish of Hackney.

Hackney Town Hall is about 5 miles (8 km) north-east of Charing Cross; and 3.8 miles (6.1 km) from the GLA City Hall near Tower Bridge. 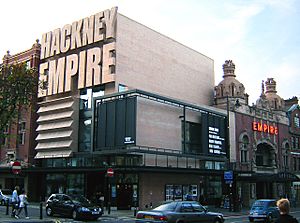 The refurbished Hackney Empire is one of the oldest surviving music halls in Britain. (September 2005)

South of Hackney Central railway station Mare Street slices through Hackney's 'cultural quarter' of Town Hall Square. Its north side is dominated by Frank Matcham's Grade II* listed 1901 Hackney Empire music hall, on whose stage appeared Charles Chaplin and Marie Lloyd – who lived in nearby Graham Road. On the west side of Town Hall Square is the 1934-7 Grade II Hackney Town Hall in Portland Stone, fronted by an open space created when its predecessor, the Hackney Vestry Hall of 1860 was demolished. A new town hall complex is being constructed behind the existing building. Opposite on the East side, is the 2001 refurbishment of the Central Library and Methodist Hall, combined to form the Ocean Music Venue. 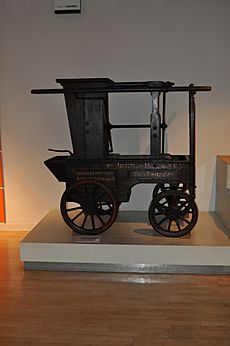 The square is completed by the 2002 Learning and Technology Centre. This houses the new Hackney Central Library, the Hackney Archive, the local museum and the offices of the Hackney Learning Trust.

The Clowns Gallery-Museum used to be housed behind the Town Hall. It later relocated to the Holy Trinity Church in Dalston.

North of the railway bridge, Mare Street continues as The Narroway (originally known as Church Street). By St Augustine's Tower, a Grade I landmark, is the 'Old Town Hall' built to serve the Parish of Hackney in 1802. It is now a betting shop. To the east are St Johns' Church Gardens. In 2009, they were awarded Heritage Green Flag status. Within the gardens stands the Church of St John-at-Hackney (built 1792). 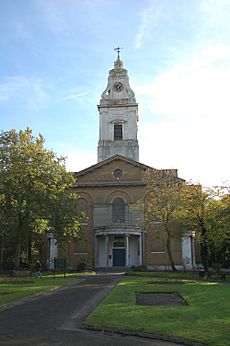 All content from Kiddle encyclopedia articles (including the article images and facts) can be freely used under Attribution-ShareAlike license, unless stated otherwise. Cite this article:
Hackney Central Facts for Kids. Kiddle Encyclopedia.