City Hall is the headquarters of the Greater London Authority (GLA), which comprises the Mayor of London and the London Assembly. It is located in Southwark, on the south bank of the River Thames near Tower Bridge. It was designed by Norman Foster and opened in July 2002, two years after the Greater London Authority was created. It is not owned by the GLA, but occupied under lease. In June 2020, the Greater London Authority started a consultation on proposals to vacate City Hall and move to the GLA owned property, The Crystal building, at the end of 2021. The decision was confirmed on 3 November 2020 with the move due to be completed by 31 December 2021.

For the first two years of its existence, the Greater London Authority was based at Romney House, Marsham Street in Westminster. Meetings of the London Assembly took place at Emmanuel Centre, also on Marsham Street.

City Hall was constructed at a cost of £43 million on a site formerly occupied by wharves serving the Pool of London. The building does not belong to the GLA but is leased under a 25-year rent. Despite its name, City Hall is not in and does not serve a city (as recognised by English constitutional law), which often adds to the confusion of Greater London with the City of London, which has its headquarters at Guildhall. In June 2011, Mayor Boris Johnson announced that for the duration of the London 2012 Olympic Games, the building would be called London House.

The predecessors of the Greater London Authority, the Greater London Council and the London County Council, had their headquarters at County Hall, upstream on the South Bank. Although County Hall's old council chamber is still intact, the building is unavailable for use by the GLA because of its conversion into, among other things, a luxury hotel, amusement arcade and aquarium. 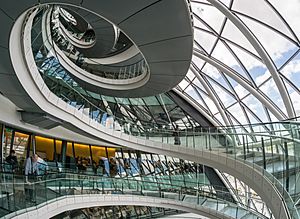 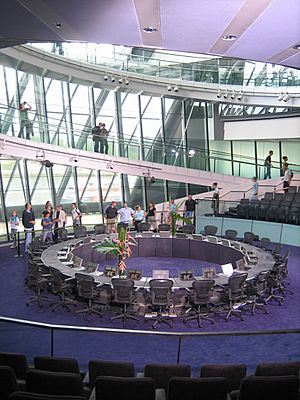 The building has an unusual, bulbous shape, purportedly intended to reduce its surface area and thus improve energy efficiency, although the excess energy consumption caused by the exclusive use of glass (in a double facade) overwhelms the benefit of shape. Despite claiming the building "demonstrates the potential for a sustainable, virtually non-polluting public building", energy use measurements have shown this building to be fairly inefficient in terms of energy use (375 kWh/m2/yr), with a 2012 Display Energy Performance Certificate rating of "E". It has been compared variously to Darth Vader's helmet, a misshapen egg, a woodlouse and a motorcycle helmet. Boris Johnson has referred to it as "The Onion". Its designers reportedly saw the building as a giant sphere hanging over the Thames, but opted for a more conventionally rooted building instead. It has no front or back in conventional terms but derives its shape from a modified sphere.

A 500-metre (1,640 ft) helical walkway, based on that used in the cupola of the Reichstag building in Berlin, ascends the full height of the building. At the top of the ten-storey building is an exhibition and meeting space called "London's Living Room", with an open viewing deck which is occasionally open to the public. The walkway provides views of the interior of the building, and is intended to symbolise transparency; a similar device was used by Foster in his design for the rebuilt Reichstag (parliament) in Germany. In 2006 it was announced that solar photovoltaic cells would be fitted to the building by the London Climate Change Agency.

The council chamber is located at the bottom of the helical stairway. The seats and desks for Assembly Members are arranged in a circular form with no clearly defined "head", podium, or chair where a speaker, council chairperson, or mayor might be seated. Raised tiers of seats for visitors or observers is located to one side. 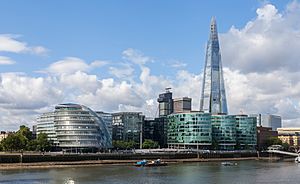 Southwark bank of the River Thames, near Tower Bridge 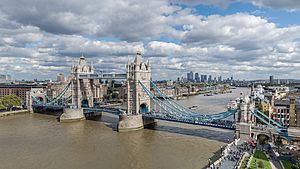 Tower Bridge and Canary Wharf viewed from the balcony around the top of the building.

The building is located on the River Thames in the London Borough of Southwark. It forms part of a larger development called More London, including offices and shops. Next to City Hall is a sunken amphitheatre called The Scoop, which is used in the summer months for open-air performances; it is not, however, part of the GLA's jurisdiction. The Scoop and surrounding landscape were designed by Townshend Landscape Architects. The nearest London Underground and National Rail station is London Bridge.

All content from Kiddle encyclopedia articles (including the article images and facts) can be freely used under Attribution-ShareAlike license, unless stated otherwise. Cite this article:
City Hall, London Facts for Kids. Kiddle Encyclopedia.