The More London development from City Hall on the Thames waterfront.

More London, part of an area known as London Bridge City, is a development on the south bank of the River Thames, immediately south-west of Tower Bridge in London. It is owned by the Kuwaiti sovereign wealth fund. 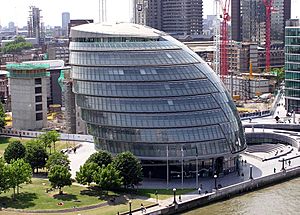 City Hall, showing the rest of the More London Development under construction in the background

More London is 13 acres (53,000 m2) in size and has planning consent for 3,000,000 square feet (280,000 m2) of mixed use space, of which up to two million square feet will be offices, accommodating up to 20,000 people. The buildings were designed by Foster and Partners architects. The buildings are known as 1 & 6 More London Place, and 2, 3, 4 and 7 More London Riverside. The public area, which includes The Scoop, a fountain and planting areas, was designed by Townshend Landscape Architects.

There are frequently outdoor exhibitions and cultural events in More London. For most of 2005 there was a popular open-air exhibition of large environmental photographs called Earth from the Air.

In 2007, the development was shortlisted for the Carbuncle Cup architecture prize, an annual competition by Building Design for "the ugliest building in the United Kingdom completed in the last 12 months".

"The Rill", a brick water channel that ran along one walkway of the area, was filled in during 2018.

The site including its open spaces is owned by St Martins Property Group and managed by Broadgate Estates.

All content from Kiddle encyclopedia articles (including the article images and facts) can be freely used under Attribution-ShareAlike license, unless stated otherwise. Cite this article:
More London Facts for Kids. Kiddle Encyclopedia.