Today, County Hall is the site of businesses and attractions, including the London Sea Life Aquarium, London Dungeon and a Namco Station amusement arcade. The London Eye is next to County Hall, and its visitor centre is inside the building. There is also a suite of exhibition rooms which was home to the Saatchi Gallery from 2003 to 2006. Other parts of the building house two hotels (a budget Premier Inn & a 5 star Marriott Hotel), several restaurants, and some flats. Various spaces are available for hire for functions, including the council chamber at the heart of the building. Until January 2010 the Dali Universe was also in the building but this has now closed and will be reopening in another venue soon.

In 2016 London event venue company etc.venues announced plans to open a conference and event space in County Hall. Based on the 4th floor overlooking the Thames, the venue will open in January 2017.

The main six storey building was designed by Ralph Knott. It is faced in Portland stone in an Edwardian Baroque style. The construction, which was undertaken by Holland, Hannen & Cubitts, started in 1911 and the building was opened in 1922 by King George V. The North and South blocks, which were built by Higgs and Hill, were added between 1936 and 1939. The Island block was not completed until 1974. 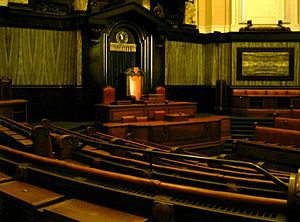 Council Chamber of the LCC, from the majority benches

For 64 years County Hall served as the headquarters of local government for London. During the 1980s the then powerful Labour-controlled GLC led by Ken Livingstone was locked in conflict with the Conservative government of Margaret Thatcher. Since the Parliament buildings were just across the river from County Hall, the façade of County Hall frequently in more than one year of her tenure served as a billboard for opposition slogans. When the government of Margaret Thatcher abolished the GLC in 1986, County Hall lost its role as the seat of London's government. Talk soon became of what was to happen to the building, and plans to relocate the London School of Economics to the site from its Westminster campus were overruled by Mrs Thatcher, seemingly disapproving of further slogans from students. The building remained in use by the Inner London Education Authority (ILEA) until its abolition in 1990 when the building was transferred to the London Residuary Body and eventually sold to private investors. On 21 October 2005, the High Court of England and Wales upheld a bid by the owners of the building, Shirayama Shokusan, to have the Saatchi Gallery evicted on grounds of violating its contract, particularly using space outside of the rented area for exhibits. Today, the majority of the building, including the entire fourth and fifth floors, remains empty since the dissolution of the GLC. Another small section of the building is occupied as a Premier Inn.

The County Hall Island Block, an annex of the main building, was demolished in 2006 to make way for a hotel, the Park Plaza Westminster Bridge. The building, also known as No 1 Westminster Bridge Road, had been disused since 1986 and had become a derelict eyesore.

A blue plaque commemorates the LCC, GLC and the Inner London Education Authority at County Hall.

All content from Kiddle encyclopedia articles (including the article images and facts) can be freely used under Attribution-ShareAlike license, unless stated otherwise. Cite this article:
County Hall, London Facts for Kids. Kiddle Encyclopedia.