The London Dungeon is a tourist attraction along London's South Bank, England, which recreates various gory and macabre historical events in a gallows humour style. It uses a mixture of live actors, special effects and rides. 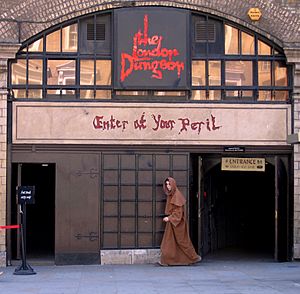 The London Dungeon was opened in 1974 by Annabel Geddes. The attraction was originally a wax exhibition of gory and macabre history, comprising themed tableaux under the Tooley Street arches. Early characters included Boudica, Mary Tudor and Thomas Becket and had scenes from the Norman Conquest.

From the late 1980s to mid 90s, it evolved to feature walkthrough theatrical shows, such as the Great Fire of London and Jack the Ripper, during which time it was owned by the Kunick Leisure Group. It was acquired by Vardon Attractions in 1992, which later became Merlin Entertainments through a management buy out, led by Nick Varney. Merlin rebranded the Dungeon more as an interactive horror attraction, less historically-accurate and based around bad taste humour.

In 2013, the London Dungeon moved from its premises of 39 years in Tooley Street, to County Hall, South Bank, to be grouped with other Merlin-owned attractions such as the London Eye.

The London Dungeon features 19 shows, 20 actors and 2 rides. Visitors are taken on a journey through 1000 years of London's history where they meet actors performing as some of London's most infamous characters, including Jack the Ripper and Sweeney Todd. The Dungeon's shows are staged on theatrical sets with special effects. The show incorporates events such as the Black Death and the Gunpowder Plot, and includes characters such as "The Torturer", "The Plague Doctor", and "The Judge". Guests are encouraged to participate in the shows. The experience also includes a "drop ride to doom", a free-fall ride staged as a public hanging.

The original London Dungeon opened in 1974 as a gory horror exhibition through dark British history, operating as a free-flow walkthrough attraction, themed to torture and sin. It was expanded in the 1980s and 90s with several elaborate animated walkthrough attractions, such as the Great Fire of London and Jack The Ripper.

In 1997, by which time the Dungeon was managed by Vardon Attractions, the majority of the attraction was completely redesigned as a batched walkthrough rather than free-flow exhibit. This saw the arrival of Judgment Day, a water dark ride that began with visitors entering a mock trial to be sentenced to death, then boarding a boat through Traitor's Gate to their execution. The boat ride included a vertical lift and a backwards drop. Many of the original horror tableaux were also refurbished as part of a new ransacked village scene, at the start of the attraction. 2000 saw the re-introduction of the Fire of London segment, which simulated the burning streets of 17th Century London and featured a spinning trommel with smoke effects.

Under Merlin Entertainments, increasingly actor-led segments were added during the 2000s, such as the "Labyrinth of the Lost" mirror maze and the "Great Plague". In 2004, the Judgement Day boat ride was altered into Traitor - Boat Ride to Hell, removing the original effects and scenes to become a simple boat ride largely through darkness.

2006 saw the arrival of a Sweeney Todd segment. The attraction used surround sound and sensory effects to simulate an encounter with the titular character, before visitors' chairs were suddenly tilted backwards as a shock effect. Another ride segment was added in 2007, Extremis - Drop ride to Doom, based on the hangings at Newgate gallows. Guests were raised 20 feet to meet an animatronic judge, priest and hangman before a free fall drop into darkness. The new ride replaced the Blood and Guts cafè.

In 2008, there were changes to the Jack the Ripper segment, which included a new ending scene in the "Ten Bells" pub. In 2009 came "Surgery - Blood and Guts", which focused on gore and anatomy and used audience interaction. "Bloody Mary: Killer Queen" opened in 2010, in place of the "Fire of London" segment and selected a random audience member to be publicly burned as a "heretic" using smoke effects.

Vengeance 5D opened in 2011, an interactive seated shooter ride, themed to a sèance. The ride was constructed in areas of the original Jack the Ripper attraction, which was significantly shortened to accommodate the new ride. Vengeance lasted only one season.

The new County Hall Dungeon features some of the attractions repurposed from the Tooley Street Dungeon, not including Bloody Mary and Vengeance 5D. The remainder of the Tooley Street interior was auctioned off to the public. The original venue was redeveloped by Network Rail.

The London Dungeon is one of six Dungeons in the UK. There are also a number of related attractions around the world.

All content from Kiddle encyclopedia articles (including the article images and facts) can be freely used under Attribution-ShareAlike license, unless stated otherwise. Cite this article:
London Dungeon Facts for Kids. Kiddle Encyclopedia.