Guy Fawkes (13 April 1570 – 31 January 1606) sometimes known as Guido Fawkes, was a member of a group of Roman Catholic revolutionaries from England who planned to carry out the Gunpowder Plot. Fawkes and the other plotters planned to kill the king, James I, and replace him with a Catholic monarch.

The 5th of November 1605 is remembered each year in the UK, during Guy Fawkes Night. People build large bonfires, light fireworks, and burn figures of Fawkes (known as 'the guy').

November 5 was the date when Parliament re-assembled after a long recess. The plot was uncovered quite late, in the night before the day of the 5th. Fawkes was arrested as he sat in a cellar, near the gunpowder, waiting for the right time to set it off. He was tortured to make him reveal the names of the other plotters. Later eight men, including Fawkes, stood trial for high treason. They were found guilty and executed by hanging in Westminster, London, except for Fawkes, who killed himself by jumping from the scaffold before he was to be hanged. Their remains were sent to the corners of the kingdom and displayed, as a warning to others. There were five other conspirators; the main man, Robert Catesby, was killed by the Sheriff of Worcester when he tried to flee.

There are many places to find Fawkes in popular literature. Here are some important examples, listed in chronological order. 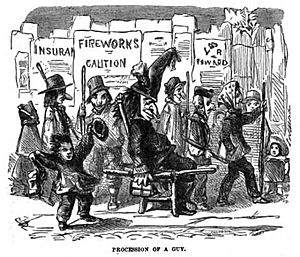 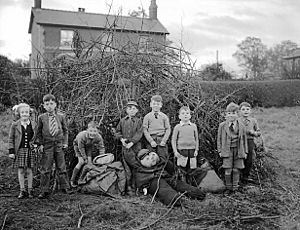 The Fifth of November

Remember, remember!
The fifth of November,
The Gunpowder treason and plot;
I know of no reason
Why the Gunpowder treason
Should ever be forgot!
Guy Fawkes and his companions
Did the scheme contrive,
To blow the King and Parliament
All up alive.
Threescore barrels, laid below,
To prove old England's overthrow.
But, by God's providence, him they catch,
With a dark lantern, lighting a match!
A stick and a stake
For King James's sake!
If you won't give me one,
I'll take two,
The better for me,
And the worse for you.
Holloa, boys! holloa, boys! make the bells ring!
Holloa, boys! holloa boys! God save the King!
Hip, hip, hooor-r-r-ray!

All content from Kiddle encyclopedia articles (including the article images and facts) can be freely used under Attribution-ShareAlike license, unless stated otherwise. Cite this article:
Guy Fawkes Facts for Kids. Kiddle Encyclopedia.