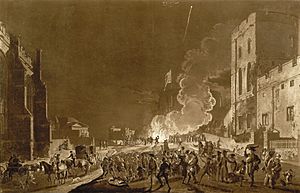 It's history begins with the events of 5 November 1605, when Guy Fawkes, a member of the Gunpowder Plot, was arrested while guarding explosives the plotters had placed beneath the House of Lords. Celebrating the fact that King James I had survived the attempt on his life, people lit bonfires around London; and months later, the introduction of the Observance of 5th November Act enforced an annual public day of thanksgiving for the plot's failure.

Settlers exported Guy Fawkes Night to overseas colonies, including some in North America, where it was known as Pope Day. Those festivities died out with the onset of the American Revolution.

Guy Fawkes night was banned in most Australian states for safety reasons in the 1980's.

All content from Kiddle encyclopedia articles (including the article images and facts) can be freely used under Attribution-ShareAlike license, unless stated otherwise. Cite this article:
Guy Fawkes Night Facts for Kids. Kiddle Encyclopedia.