Punch, or The London Charivari was a British weekly magazine of humour and satire established in 1841 by Henry Mayhew and wood-engraver Ebenezer Landells. Historically, it was most influential in the 1840s and 1850s, when it helped to coin the term "cartoon" in its modern sense as a humorous illustration. 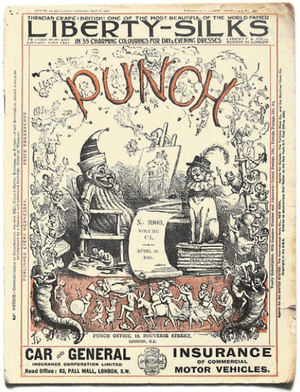 Punch was founded in July 17, 1841 by Henry Mayhew and engraver Ebenezer Landells. At its founding it was jointly edited by Mayhew and Mark Lemon. Initially subtitled The London Charivari, a reference to a satirical humour magazine published in France under the title Le Charivari. Reflecting their satiric and humorous intent, they took for their name and masthead the anarchic glove puppet, Mr. Punch; the name also referred to a joke made early on about one of the magazine's first editors, Lemon, that "punch is nothing without lemon." Mayhew ceased to be joint editor in 1842 and became 'suggestor in chief' until he severed his connection in 1845. Punch was responsible for the modern use of the word 'cartoon' to refer to a comic drawing. The illustrator Archibald Henning designed the cover of the magazine's first issues. The cover design varied in the early years, though Richard Doyle designed what became the magazine's masthead in 1849.

Circulation peaked during the 1940s when it reached 175,000, but slowly declined over the years, until the magazine was forced to close in 1992 after 150 years of publication.

In early 1996, the controversial Egyptian businessman Mohamed Al-Fayed bought the rights to the name, and it was re-launched later that year. The magazine never became profitable in its new incarnation, and at the end of May 2002, it was announced that Punch would once more cease publication. Press reports at the time quoted a total loss to its owner of some £16 million (about $28 million U.S.) over the six years of publication, with only 6,000 subscribers at the end. 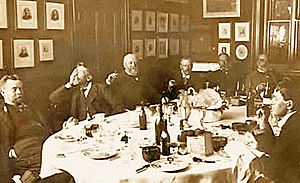 Editorial meeting of Punch magazine in the late 19th century.

Editors of Punch during its first 150 years were:

All content from Kiddle encyclopedia articles (including the article images and facts) can be freely used under Attribution-ShareAlike license, unless stated otherwise. Cite this article:
Punch magazine Facts for Kids. Kiddle Encyclopedia.