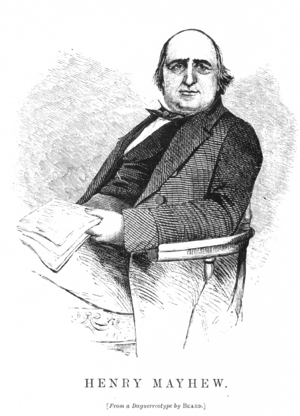 Henry Mayhew, from London Labour and the London Poor (1861)

Henry Mayhew (25 November 1812 – 25 July 1887) was a journalist, playwright, and advocate of reform. He was one of the co-founders of the satirical magazine Punch in 1841, and was the magazine's joint editor, with Mark Lemon, in its early days. He is also known for his work as a social researcher, publishing an extensive series of newspaper articles in the Morning Chronicle that was later compiled into the book series London Labour and the London Poor (1851), a groundbreaking and influential survey of the city's poor.

All content from Kiddle encyclopedia articles (including the article images and facts) can be freely used under Attribution-ShareAlike license, unless stated otherwise. Cite this article:
Henry Mayhew Facts for Kids. Kiddle Encyclopedia.