Punch and Judy facts for kids 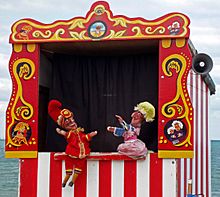 Punch and Judy is a very popular puppet show which children in Britain love to watch. It is traditionally performed at the seaside in a small booth which can easily be transported. The characters are all glove puppets. The story is told by a man who calls himself “The Professor”. He cannot be seen, but he wears the puppets on his hand like gloves and makes them move.

Punch wears a jester's motley. He is hunchbacked and his hooked nose almost meets his curved chin. He has a big stick and hits the other characters with his stick, saying "That's the way to do it!". He speaks in a funny way called a swazzle. There is also a baby, a crocodile, a policeman and a string of sausages. The simple kind of humour used is called “slapstick”.

The Punch and Judy show has its origins in the 16th century Italian commedia dell'arte. This sort of comedy always had the same people in the stories (“stock characters”). The figure of Punch comes from the stock character of Pulcinella, called Punchinello in English. Punch's wife was originally "Joan". 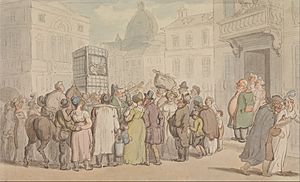 May 9, 1662 is said by 'Professors' to be Punch's UK birthday, for that was the first known date on which the figure who later became Mr. Punch was seen in Britain. The diarist Samuel Pepys saw a puppet show using an early version of the Punch character near St. Paul's Church in London's Covent Garden.

The British show developed into "Punch and Judy". In other countries the stories developed differently. In Germany, Punch is called "Kasper" and Judy is "Grete". The characters date back to the 18th century in German-speaking countries. In The Netherlands Punch is called Jan Klaassen and Judy is Katrijn; in Denmark Mester Jackel; in Italy Pulcinella (with Teresina as the female part); in Russia Petruschka; in Romania Vasilache ; and in France Polichinelle.

In 1827, The Tragical Comedy or Comical Tragedy of Punch and Judy became the first published Punch and Judy script. In 2006, the Punch and Judy show was named one of 12 icons of Englishness by the British government’s Department for Culture, Media and Sport.

All content from Kiddle encyclopedia articles (including the article images and facts) can be freely used under Attribution-ShareAlike license, unless stated otherwise. Cite this article:
Punch and Judy Facts for Kids. Kiddle Encyclopedia.