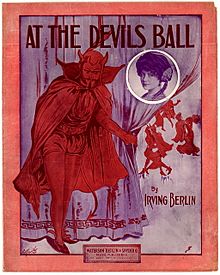 A common image of the devil, red, with horns and a tail

In some religions, the devil is a bad spirit that tries to create problems for people. Some people also use the words "the Devil" or "Satan" for the most powerful devil. The word "devil" comes from the Greek word "diabolos" which means "someone who tells lies to hurt you". ("Diabolos" is translated to the English word "slanderer.") The New Testament uses "diabolos" as a title for Satan, and so "The Devil" became another name for Satan in English.

In the Old Testament, there is the serpent and the shaitan, who may be two different characters. "Shaitan" in Hebrew means "adversary", an enemy or opponent. Shaitan is also the word used for the devil in the Koran, who often appears as an animal and tries to get people to do the wrong thing.

In Christianity the Devil was originally an angel in heaven called Lucifer. But he wanted to be the ruler of heaven and so he revolted against God. After a hard fight he was defeated and thrown out of heaven. Some other angels who helped him were also thrown out.

After the Devil was thrown out of heaven, he started doing bad things on the earth. He wants people to worship him instead of God. Sometimes he tries to trick people by giving them false promises.

The other angels who were thrown out of heaven became evil spirits called demons. They obey the Devil and help him do evil things.

The Book of Revelation says that God will punish the Devil and his demons by throwing them into a Lake of Fire that burns in Hell. This will happen in the future.

Artists draw pictures of the Devil that show him as ugly and evil. But nobody knows what he may look like. Usually he is a spirit that nobody can see, but he can make himself look like a real person in order to trick people. Many modern depictions of the devil portray him as a red human-like being with horns and a pointed tail, carrying a red pitchfork.

All content from Kiddle encyclopedia articles (including the article images and facts) can be freely used under Attribution-ShareAlike license, unless stated otherwise. Cite this article:
Devil Facts for Kids. Kiddle Encyclopedia.