Book of Revelation facts for kids 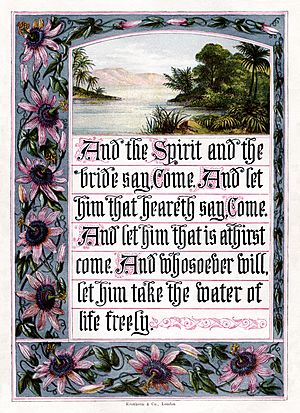 The Book of Revelation, which is sometimes called Revelation to John, Apocalypse of John, or Revelation of Jesus Christ is the last book of the New Testament in the Bible.

In Greek, the word apocalypse means revealing or unveiling.

Some people consider Revelation to be the most difficult book in the Bible. Over the course of the book the author has two visions. There are many different ways to interpret these visions, and there have been many arguments over which way is right.

The book begins by introducing John as the author and has letters to seven churches of that day. Some think that these churches also represent periods of history. Various visions follow which are highly symbolic which allows many different interpretations. They have been understood by various groups to represent past and future events. Some believe that many of these prophecies have already been fulfilled. Others think they will be fulfilled at the end of time. Others think they affirm the victory of Christ over all enemies, but do not refer to specific events. The book ends with a vision of the faithful souls in the next life rejoicing around the throne of God.

All content from Kiddle encyclopedia articles (including the article images and facts) can be freely used under Attribution-ShareAlike license, unless stated otherwise. Cite this article:
Book of Revelation Facts for Kids. Kiddle Encyclopedia.