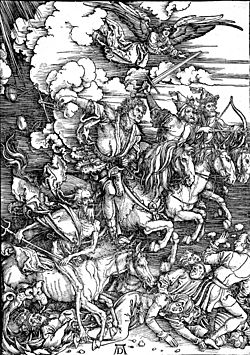 Painting of supposed life after the Rapture

The Rapture (meaning "to carry to another place") is a future event in Christian theology where Jesus Christ will return to Earth to bring his followers to Heaven. In Christianity it is believed that following this amazing event, the world will go through what is called the tribulation. Then later following, will come the millennium (a thousand years).

The tribulation (or the great tribulation) is supposed theory of life after the rapture. Most Christians agree that the period lasts around seven years. During these years, it is believed that the Antichrist will come to power and control the world.

The Millennium is the period following the rapture, and the tribulation, that Christians believe they will live in glory on the Earth. They also believe that Jesus Christ will be in total control over earth for 1,000 years (a millennium).

In 1950, the novel Raptured by Ernest Angley was published, and in 1995, the first of the Left Behind series was published. These and other books have made the story of the rapture and the tribulation popular.

The Rapture story has been retold in many movies. The most well-known production company is Cloud Ten Pictures. Which have created the Left Behind film series (Left Behind: The Movie, Left Behind II: Tribulation Force, and Left Behind: World at War), as well as several other movies. Some other notable end times movies are A Thief in the Night and The Omega Code.

All content from Kiddle encyclopedia articles (including the article images and facts) can be freely used under Attribution-ShareAlike license, unless stated otherwise. Cite this article:
Rapture Facts for Kids. Kiddle Encyclopedia.