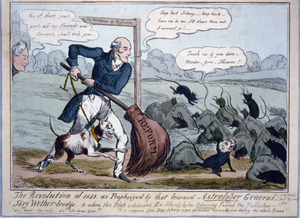 The revolution of 1831. As prophecied by that learned astrologer General Ikey Wether-Bridge

A prophecy is a claim of what the future will be like, which is not based on any ordinary source of information. In some ways, prophecies are similar to religion. Not all people believe in prophecy. People that do think they come from God or a god. They are often hard to understand and need interpretation. Very often, they concern one very specific event. People who make prophecies are called prophets. In Ancient Greece, people who made prophecies were called oracles, most notably the Oracle of Delphi. Since then, people like Nostradamus have made prophecies.

To prophesy is to make a prophecy. The two words are spelled differently and pronounced differently. "Prophesy" is a verb, and "prophecy" is a noun.

All content from Kiddle encyclopedia articles (including the article images and facts) can be freely used under Attribution-ShareAlike license, unless stated otherwise. Cite this article:
Prophecy Facts for Kids. Kiddle Encyclopedia.