Sir John Betjeman (28 August 1906 – 19 May 1984) was an English poet, writer, and broadcaster who described himself in Who's Who as a "poet and hack". He was Poet Laureate of the United Kingdom from 1972 until his death.

He was a founding member of the Victorian Society and a passionate defender of Victorian architecture. He began his career as a journalist and ended it as one of the most popular British Poets Laureate and a much-loved figure on British television. 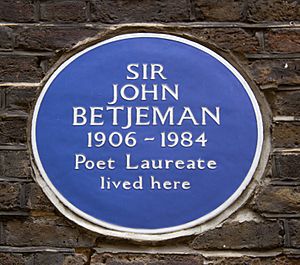 Betjeman was born in Highgate, London. He studied at Magdalen College, Oxford. In 1933 he married Penelope Chetwode; they separated in the late 1940s. The couple's son was born in 1937, their daughter in 1942. Betjeman's partner from 1951 until his death was Lady Elizabeth Cavendish.

Betjeman died of Parkinson's disease in Trebetherick, Cornwall. He was replaced as Poet Laureate by Ted Hughes. Betjeman was also known as an architectural critic. He is buried at St Enodoc in Cornwall.

All content from Kiddle encyclopedia articles (including the article images and facts) can be freely used under Attribution-ShareAlike license, unless stated otherwise. Cite this article:
John Betjeman Facts for Kids. Kiddle Encyclopedia.