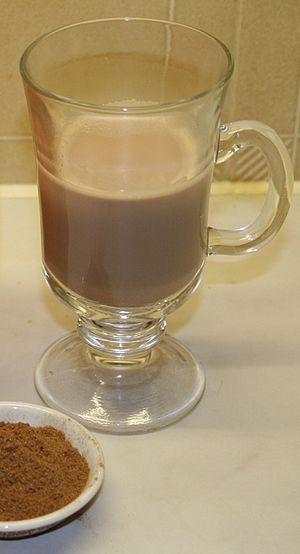 A mug of ovaltine made with hot milk, and a tablespoon of the powder

Ovaltine is a brand of milk product mixed with whey, malt and sugar. Certain flavors also have cocoa. Before 2007, Ovaltine had competed against Nesquik, claiming it was better than Nesquik.

All content from Kiddle encyclopedia articles (including the article images and facts) can be freely used under Attribution-ShareAlike license, unless stated otherwise. Cite this article:
Ovaltine Facts for Kids. Kiddle Encyclopedia.