K2 is the second highest mountain in the world, at 8,611 metres (28,251 ft). It is also known as Mount Godwin-Austen or Chhogori. K2 is part of the Karakoram range. It is located partly in China and partly in Pakistan. The name K2 came from the first survey of Karakoram. At that time, the surveyors gave each mountain a simple label of "K" followed by a number.

K2 is known as the Savage Mountain as it is very hard to climb. It is considered to be harder to climb than Mount Everest. K2 has the second-highest fatality rate among the eight-thousand-metre mountains. One person dies for every four who reach the top. As of 2011, only 300 people have climbed to the top of the mountain. At least 80 people have died trying to climb it. K2 has never been climbed during the winter.

The summit was first reached in 1954, by Italian climbers Lino Lacedelli and Achille Compagnoni.

The name K2 was first used by the Great Trigonometrical Survey of British India. Thomas Montgomerie made the first survey of the Karakoram range. He did so from Mount Haramukh which is 210 km (130 miles) to the south. At the time he sketched the two most prominent peaks, and called them K1 and K2.

The policy of the Great Trigonometrical Survey was to use local names for mountains when possible. K1 had the local name of Masherbrum which was soon used. K2, however, appeared not to have a local name. This may have been due to its remoteness. It is not visible from Askole, the last village to the south, or from the nearest village to the north. It is believed few local people would have gone to where it could be seen. The name Chogori, from two Balti words, chhogo ("big") and ri ("mountain") (چھوغوری) has been suggested as a local name. There is not much evidence for its widespread use, however. It may have been invented by Western explorers. It does form the basis for the name Qogir (simplified Chinese: 乔戈里峰; traditional Chinese: 喬戈里峰; pinyin: Qiáogēlǐ Fēng) which the Chinese government uses as the official name of the mountain.

As the mountain did not have a local name, the name Mount Godwin-Austen was suggested. This was in honor of Henry Godwin-Austen who had been an early explorer of the area. While the name was rejected by the Royal Geographical Society, it was used on several maps and is still used once in a while.

The label K2 is still the name by which the mountain is commonly known. It is now also used in the Balti language, rendered as Kechu or Ketu. The Italian climber Fosco Maraini stated that while the name K2 came by chance, is was good for the mountain. He said:

... just the bare bones of a name, all rock and ice and storm and abyss. It makes no attempt to sound human. It is atoms and stars. It has the nakedness of the world before the first man – or of the cindered planet after the last. 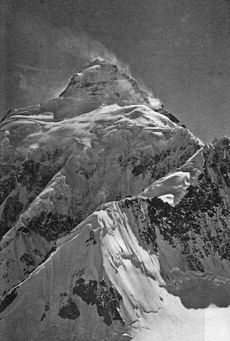 The mountain was first surveyed by a European team in 1856. Team member Thomas Montgomerie called the mountain K2. The other mountains were originally named K1, K3, K4, and K5, but were later changed to use local names. In 1892, Martin Conway led a British expedition that made it to the Baltoro Glacier.

The first real attempt to climb K2 was in 1902 by an Anglo-Swiss expedition. It took fourteen days for them to reach the foot of the mountain. After five attempts the team only made it to 6,525 metres (21,407 ft).

The next expedition was in 1909. It was led by the Italian Prince Luigi Amedeo, Duke of the Abruzzi. This team made it only to an elevation of 6,250 metres (20,510 ft) on the South East Spur of the mountain. After looking for and not finding other routes, the Duke said that K2 would never be climbed.

The next attempt was not made until 1938. At that time, American Charles Houston took an expedition to the mountain. They decided that the Abruzzi Spur was the best route and made it to a height of around 8,000 metres (26,000 ft).

In 1939, an American expedition led by Fritz Wiessner came within 200 metres (660 ft) of the summit. It ended in disaster when four members died on the mountain.

Charles Houston tried again in 1953. The try was a failure due to a storm which trapped the team for 10 days at 7,800 metres (25,590 ft). One climber died in the expedition. Many others nearly died in a mass fall but were saved by Pete Schoening. 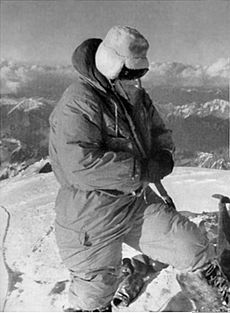 Achille Compagnoni on K2's summit in 1954

Finally, in 1954, an Italian expedition made it to the summit. It was lead by geologist Ardito Desio. The two climbers to reach the top were Lino Lacedelli and Achille Compagnoni, at 6pm on 31 July 1954. One member of the expedition (Colonel Muhammad Ata-ullah of Pakistan) had been part of the 1953 American attempt as well. Other members were scientists, a doctor, a photographer, and others. Mario Puchoz died in the attempt. Two other members had to be hospitalized and one had to have his toes amputated due to frostbite.

The second success was not until 23 years after the first. It was a Japanese expedition lead by Ichiro Yoshizawa in 1977.

The third success was in 1978, and used a different route from the first two. This one was done by an American team, lead by James Whittaker.

Another notable success was in 1982, when a Japanese team climbed from the harder Chinese side of the mountain. The previous successes had been from the Pakistan side. The expedition was lead by Isao Shinkai and Masatsugo Konishi. Three members of the team made it to the summit on 14 August. One of them, however, died on when coming down. Four other members made it to the summit the next day, on 15 August.

The first woman to reach the summit was Polish climber Wanda Rutkiewicz in 1986. Two other women reached the summit later that same day, but died when coming down.

In 2004, the Spanish climber Carlos Soria Fontán became the oldest person ever to summit K2, at the age of 65.

In 2018, Polish climber Andrzej Bargiel became the first person to ski down K2 after he made it to the top.

In addition to these notable successes, about 300 people have climbed to the top of the mountain.

Even though the summit of Everest is higher, K2 is a much more difficult and dangerous climb. This is in part due to its worse weather. It is believed by many to be the world's most difficult and dangerous climb. This is what lead to the nickname "the Savage Mountain". Only about 300 people have made it to the top. This is much less than the 5,600 who have made it to the top of Everest. At least 80 (as of September 2010) people have died attempting the climb.

While some have tried to climb K2 during the winter, none have yet had success.

All content from Kiddle encyclopedia articles (including the article images and facts) can be freely used under Attribution-ShareAlike license, unless stated otherwise. Cite this article:
K2 Facts for Kids. Kiddle Encyclopedia.