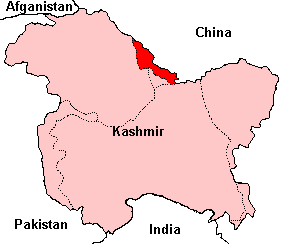 map of the boundary agreement between China and Pakistan

The Trans-Karakoram Tract is an area of nearly 5,800 km² that, India claims, was transferred by a border agreement from the Pakistani-administered Northern Areas to China in 1963 with the proviso that the settlement was subject to the final solution of the Kashmir dispute. Pakistan says that it was a no-man's undemarcated border land, hence no question arises of its being transferred. The transfer is disputed by India which claims the Tract as part of Jammu and Kashmir state.

The tract, called Shaksgam, is technically part of Shigar, a valley of Baltistan region of Ladakh Province. The Raja of Shigar controlled this land until 1971, when Pakistan abolished the Raja government system. A polo ground in Shaksgam was built by the Amacha Royal family of Shigar, and the Rajas of Shigar used to invite the Amirs of Yarkand to play polo there. All the names of the mountains, lakes, rivers and passes are in Balti/Ladakhi, suggesting that this land has been part of Baltistan/Ladakh province for a long time.

The Tract is one of the most inhospitable areas of the world, with some of the highest mountains including Broad Peak, Gasherbrum and Masherbrum, and is adjacent to the highest battlefield in the world at Siachen Glacier.

All content from Kiddle encyclopedia articles (including the article images and facts) can be freely used under Attribution-ShareAlike license, unless stated otherwise. Cite this article:
Trans-Karakoram Tract Facts for Kids. Kiddle Encyclopedia.