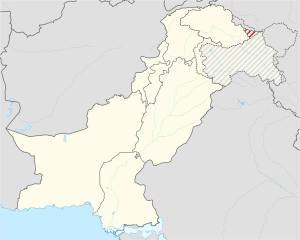 The Siachen Glacier (Urdu: سیاچن گلکئر) is in the eastern Karakoram range in the Himalaya Mountains along the disputed India-Pakistan interim border at approximately 35.5° N 77.0° E. Siachen Glacier was the Land of Wild Roses before it became a battle field. It is the longest glacier in the Karakoram and second longest in the world's non-polar areas. It ranges from an altitude of 5,753 m (18,875 ft) above sea level at its source at Indira Col (pass) on the China border to its snout at 3,620 m (11,875 ft)

The Siachen War started on April 13, 1984. It has shown that the climatic conditions has killed the soldiers more than the enemy's attack. It is in the northern part of Kashmir. Muslim-majority Kashmir is at the heart of hostility between India and Pakistan and was the cause of two of their three wars (the third was over the founding of Bangladesh).Indian and Pakistani forces, estimated to number between 10,000 and 20,000 troops combined, have faced off against each other in mountains above the Siachen glacier in the Karakoram range since 1984.The no-man's-land of Siachen is 20,000 feet (6,000 metres) above sea level. Military experts say the inhospitable climate and avalanche-prone terrain have claimed more lives than gunfire.The strategic importance of the glacier is debatable, military experts say. Until 1984, neither side had troops there.Both countries agree on a need to demilitarise the glacier, but neither side wants to take the first step.India controls the heights and is loath to withdraw for fear Pakistan might walk in. India says it is unwilling to bring its forces down until Pakistan officially authenticates the positions they hold.  Pakistan has said it is willing to do so on the condition that it is not a final endorsement of India's claim over the glacier, a source of melt water for Pakistan's rivers.

All content from Kiddle encyclopedia articles (including the article images and facts) can be freely used under Attribution-ShareAlike license, unless stated otherwise. Cite this article:
Siachen Glacier Facts for Kids. Kiddle Encyclopedia.