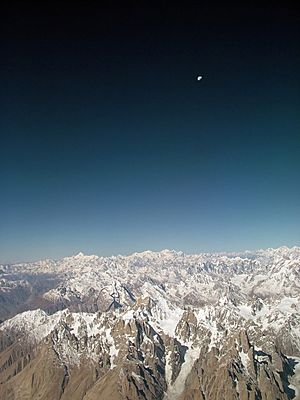 View of the moon over Karakoram

The Karakoram is a Mountain range in Asia. The name is from a Turkic word meaning back gravel. It is mainly located in China, India, and Pakistan. Parts of the range extend into Afghanistan and Kyrgyzstan. Many of its mountains are in the regions of Gilgit-Baltistan, Ladakh, and Xinjiang. It is the second highest mountain range in the world. The Karakoram is part of a complex of mountain ranges that also includes the Himalaya, Hindu Kush, and Pamir ranges. The range has eight mountains with tops over 7,500 metres (24,600 ft) high. Four of these are higher than 8,000 metres (26,000 ft). They are K2, Gasherbrum I, Broad Peak, and Gasherbrum II. K2 is the world's second highest peak.

The range is about 500 km (311 mi) long and it covers a tract about 48 km (30 mi) broad. Karakoram separates the State of Kashmir from China, and South-central Asian States. It also protects Kashmir from the extreme cold winds of Siberia. There are over 300 peaks with an elevation between 1,480 metres (4,860 ft) and 8,611 metres (28,251 ft) high. Karakoram is the most glaciated part of the world outside the polar regions. Glaciers cover about 28-50% of the mountains in the range. This is much higher than the Himalayan average of 8-12%. Some of the famous glaciers are the Siachen Glacier (76 kilometres (47 mi) long) and Biafo Glacier (63 kilometres (39 mi)long). These are the second and third longest glaciers in the world, outside the polar region. Many hilly lakes and hot-water springs are also located in Karakoram. The valleys are sources to many rivers and streams which drain in the Indus River.

The 5,540 metres (18,180 ft) high Karakoram Pass connects Kashmir with the Central Asian states. It is considered to be a historical route. Shaksgam Pass, Aghil Pass, and Khunjerab Pass are also in this range of mountains.

Part of Karakoram, as seen from K2

All content from Kiddle encyclopedia articles (including the article images and facts) can be freely used under Attribution-ShareAlike license, unless stated otherwise. Cite this article:
Karakoram Facts for Kids. Kiddle Encyclopedia.