Khunjerab Pass (elevation 4,693 metres or 15,397 feet) is a high mountain pass in the Karakoram Mountains in a strategic position on the northern border of Pakistan and on the southwest border of China.

Highest Border crossing in the world 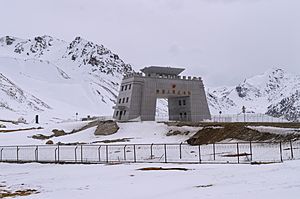 The Khunjerab Pass is the highest paved international border crossing in the world and the highest point on the Karakoram Highway. The long, relatively flat pass is often snow-covered during the winter season and as a consequence is generally closed for heavy vehicles from November 30 to May 1 and for all vehicles from December 30 to April 1. This is one of the international borders where left-hand traffic (Pakistan) changes to right-hand traffic (China) and vice versa.

It has the highest ATM in the world on the Pakistani side.

All content from Kiddle encyclopedia articles (including the article images and facts) can be freely used under Attribution-ShareAlike license, unless stated otherwise. Cite this article:
Khunjerab Pass Facts for Kids. Kiddle Encyclopedia.