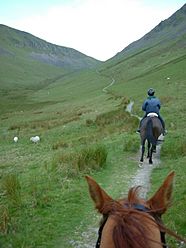 In a group of hills or mountains, a pass is a path for crossing a mountain. It is usually a saddle point between two higher areas. Many of the world's mountain ranges have always made travel difficult so passes have been important throughout history in trade, war and migration.

A pass has the general form of a saddle between two mountains. They are often found just above the source of a river, making a sort of "bridge" over to the headwaters of another river. Passes may be very short, with steep slopes to the top of the pass, or valleys of many kilometers.

Roads and railways have been built through passes. Some high and rugged passes may have tunnels dug underneath to let traffic move faster.

The top of a pass is often the only flat ground in the area so it is often a good site for buildings. For countries whose borders lie on a mountain range, the pass is often part of the border. As well as making travel easy between valleys, passes also provide a route between two mountain tops so it is common for tracks to meet at a pass; this often makes them good routes even when travelling between a summit and the valley floor.

All content from Kiddle encyclopedia articles (including the article images and facts) can be freely used under Attribution-ShareAlike license, unless stated otherwise. Cite this article:
Mountain pass Facts for Kids. Kiddle Encyclopedia.