The Khyber Pass is a mountain pass in the northwest of Pakistan, on the border with Afghanistan. It connects the town of Landi Kotal to the Valley of Peshawar at Jamrud by traversing part of the Spin Ghar mountains. An integral part of the ancient Silk Road, it has long had substantial cultural, economic, and geopolitical significance for Eurasian trade.

Throughout history, it has been an important trade route between Central Asia and South Asia and a vital strategic military point for various states that came to control it. The Khyber Pass is part of Asian Highway 1 (AH1). 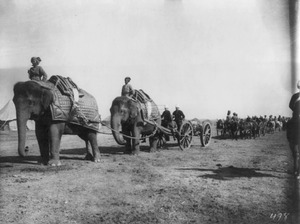 The Khyber Pass became a critical part of the Silk Road, which connected Shanghai in the East to Cádiz on the coast of Spain. The Parthian and Roman Empires fought for control of passes such as these to gain access to the silk, jade, rhubarb, and other luxuries moving from China to Western Asia and Europe. Through the Khyber Pass, Gandhara became a regional center of trade connecting Bagram in Afghanistan to Taxila in Pakistan, adding Indian luxury goods such as ivory, pepper, and textiles to the Silk Road commerce. 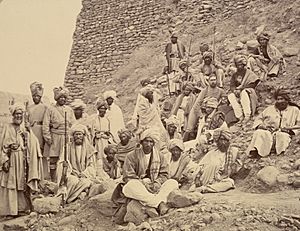 Among the Muslim invasions of the Indian subcontinent, the famous invaders coming through the Khyber Pass are Mahmud Ghaznavi, and the Afghan Muhammad Ghori and the Turkic-Mongols. Finally, Sikhs under Ranjit Singh captured the Khyber Pass in 1834 until they were defeated by the forces of Wazir Akbar Khan in 1837. Hari Singh Nalwa, who manned the Khyber Pass for years, became a household name in Afghanistan.

To the north of the Khyber Pass lies the country of the Mullagori tribe. To the south is Afridi Tirah, while the inhabitants of villages in the Pass itself are Afridi clansmen. Throughout the centuries the Pashtun clans, particularly the Afridis and the Afghan Shinwaris, have regarded the Pass as their own preserve and have levied a toll on travellers for safe conduct. Since this has long been their main source of income, resistance to challenges to the Shinwaris' authority has often been fierce.

For strategic reasons, after the First World War the British built a heavily engineered railway through the Pass. The Khyber Pass Railway from Jamrud, near Peshawar, to the Afghan border near Landi Kotal was opened in 1925. 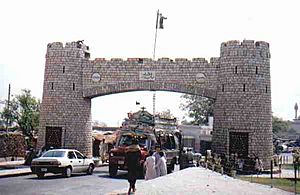 Bab-e-Khyber, the entrance gate of the Khyber Pass

The Pass became widely known to thousands of Westerners and Japanese who traveled it in the days of the hippie trail, taking a bus or car from Kabul to the Afghan border. At the Pakistani frontier post, travelers were advised not to wander away from the road, as the location was a barely controlled Federally Administered Tribal Area. Monuments left by British Army units, as well as hillside forts, could be viewed from the highway.

The area of the Khyber Pass has been connected with a counterfeit arms industry, making various types of weapons known to gun collectors as Khyber Pass copies, using local steel and blacksmiths' forges. 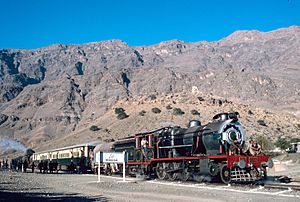 During the war in Afghanistan, the Khyber Pass has been a major route for resupplying military armament and food to the NATO forces in the Afghan area of conflict since the US started the invasion of Afghanistan in 2001.

Almost 80 percent of the NATO and US supplies that are brought in by road were transported through the Khyber Pass, though the increasingly unstable situation in northwest Pakistan made the US and NATO broaden supply routes.

It has also been used to transport civilians from the Afghan side to the Pakistani one. Until the end of 2007, this route had been relatively safe since the tribes living there were paid by the Pakistani government to keep the area safe. However, since that year, the Taliban began to control the region, and so there started to exist wider tensions in their political relationship.

All content from Kiddle encyclopedia articles (including the article images and facts) can be freely used under Attribution-ShareAlike license, unless stated otherwise. Cite this article:
Khyber Pass Facts for Kids. Kiddle Encyclopedia.