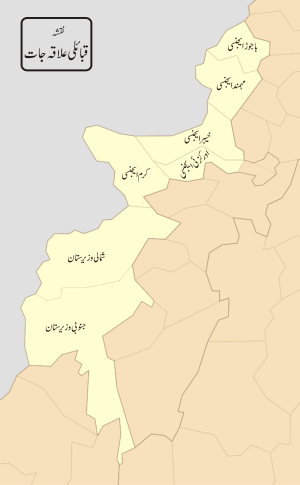 Urdu map of the region

The Federally Administered Tribal Areas (FATA) (Urdu: قبائلی علاقہ جات) in Pakistan are areas of Pakistan outside the four provinces, comprising a region of some 27,220 km² (10,507 mi²). Miran Shah is the tribal capital. There are seven areas known as Agencies and six areas known as Frontier Regions. 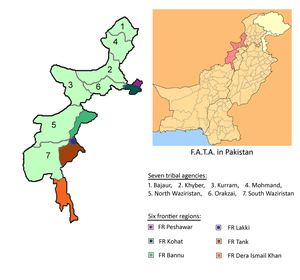 The Frontier Regions are named after their adjacent settled districts. The administration of the FR is carried out by the DCO / DC of the neighbouring named district. The overall administration of the frontier regions is carried out by the FATA Secretariat, based in Peshawar and reporting to the Governor of Khyber-Pakhtunkhwa. The six regions are:

The FATA are bordered by: Afghanistan to the west with the border marked by the Durand Line, Khyber-Pakhtunkhwa to the north and east, and Balochistan to the south.

All content from Kiddle encyclopedia articles (including the article images and facts) can be freely used under Attribution-ShareAlike license, unless stated otherwise. Cite this article:
Federally Administered Tribal Areas Facts for Kids. Kiddle Encyclopedia.