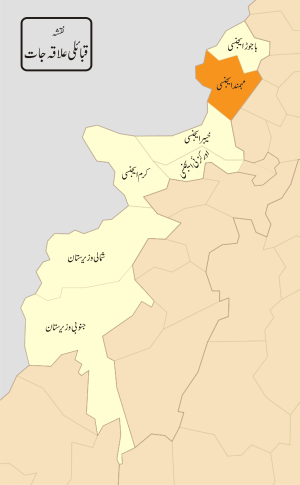 The Mohmand Agency (Urdu: مہمند) was created in 1951 before which the Mohmand Tribes were administered by the Deputy Commissioner based in Peshawar, Khyber Pakhtunkhwa, Pakistan. However it was not until 1973 that the headquarters of the Mohmand agency were moved from Peshawar to Ekkagund. Now, the permanent agency headquarters is at Ghalanai, deep in the Mohmand agency. There is scant rainfall and little irrigated land, a factor responsible for the large demographic movements of the Mohmands to the fertile lands of Charsadda and Mardan districts to the east.

All content from Kiddle encyclopedia articles (including the article images and facts) can be freely used under Attribution-ShareAlike license, unless stated otherwise. Cite this article:
Mohmand Agency Facts for Kids. Kiddle Encyclopedia.