Vanessa Audi Rhys O'Brien (born 2 December 1964) is a British and American mountaineer, explorer, aquanaut, author and former business executive. On June 12, 2020, O'Brien became the first woman to reach Earth's highest and lowest points, receiving a Guinness World Record. She became the first American woman to climb K2 and the first British woman to climb K2 (as a result of her dual nationality) on 28 July 2017, successfully leading a team of 12 members to the summit and back on her third attempt. She is a Fellow of the Royal Geographical Society (RGS) and a Member of The Scientific Exploration Society (SES).

O'Brien received a Fearless Girl Award in 2019 and was awarded Explorer of The Year in 2018 by SES. She set a Guinness World Record for climbing the highest peak on every continent in 295 days, the fastest time by a woman. O'Brien has also skied the last 60 nautical miles or 111 km to the South Pole and North Pole completing the Explorers Grand Slam in 11 months, becoming the first woman to do so in under a calendar year and the 8th woman in the world to accomplish this.

Vanessa Audi Rhys O'Brien was born on 2 December 1964 and grew up in Grosse Pointe Farms, Michigan. O'Brien attended New York University School of Professional Studies (SPS) where she received her Bachelor of Arts in Economics and Executive MBA in Finance from NYU’s Stern School of Business.

O'Brien worked as a Director of Finance and Business Development for Morgan Stanley, Barclays Bank, and the Bank of America.

Ambassador, board and research roles

O'Brien is an Honorary Advisory Board member of the Scientific Exploration Society. She is also a Community Ambassador for the outdoor equipment company, Arc'Teryx, Soho, New York, and a Goodwill Ambassador for Pakistan, an Honorary Ambassador of the US Nepal Climbers Association Inc., and is an active member of The American Alpine Club. O'Brien previously held board positions at The Explorers Club, the American Pakistan Foundation, and was a former Advisory board member for Thomson Safaris. O'Brien has contributed to a number of research and scientific projects including investigating the effects of nocturnal hypoxic exposure on high-altitude mountaineering (Explorers Club Flag No. 206 to Manaslu's summit at 26,759 feet), testing the thinning of high altitude glaciers (Explorers Club Flag #132 to the Godwin-Austen Glacier at 16,500 feet), and illustrating the impact of climate change at the equator in advance of COP21 in conjunction with Project 25Zero.

Having trekked to Mount Everest base camp and reached the summits of a number of notable mountains, including five of the world's fourteen 8,000-meter peaks (Shishapangma, Everest, Cho Oyu, Manaslu, and K2), including summiting two eight thousanders back-to-back just 8 days apart (Shishapangma and Cho Oyu), O'Brien decided to build on her passion for mountaineering and set herself the challenge of achieving the Explorers Grand Slam. The Explorers Grand Slam entails reaching the Seven Summits, the North and South Poles, as well as meeting the Three Pole Challenge.

O'Brien joined Caladan Oceanic's Ring of Fire expedition to the Pacific Ocean to survey the bottom of the three pools that constitute Challenger Deep in partnership with NOAA. On 12 June 2020, Victor Vescovo and O'Brien descended to the "Eastern Pool" of Challenger Deep spending three hours mapping the bottom, with the dive scanning approximately one mile of desolate bottom terrain, finding that the surface is not flat, as once was thought, but sloping, and by about 18 ft (5.5 m), subject to verification. 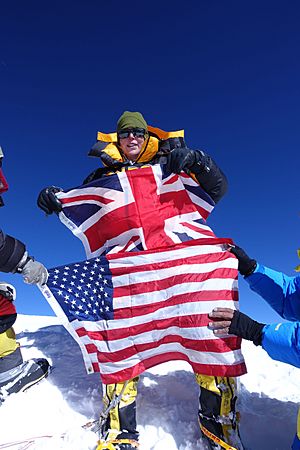 All content from Kiddle encyclopedia articles (including the article images and facts) can be freely used under Attribution-ShareAlike license, unless stated otherwise. Cite this article:
Vanessa O'Brien Facts for Kids. Kiddle Encyclopedia.