The Seven Summits are composed of each of the highest mountain peaks of each of the seven continents. Different lists include slight variations, but generally the same core is maintained. The seven summits depend on the definition used for a continent – in particular the location of the border of that continent. This results in two points of variation: the first is Mont Blanc versus Mount Elbrus for the continent of Europe; and the second depends on whether one includes all of Oceania or only mainland Australia as the continent, which results in either Puncak Jaya (also known as "Carstensz Pyramid") or Mount Kosciuszko, respectively. This also gives rise to another list called "Eight Summits" including both Puncak Jaya and Mount Kosciuszko and the rest of the six summits in the other continents.

This creates several possible versions of the seven summits:

The concept Bass and his climbing partner Frank Wells were pursuing was to be the first to stand atop the highest mountain on each continent. They pursued this goal as they defined it, climbing Aconcagua for South America, McKinley (now Denali) for North America, Kilimanjaro for Africa, Elbrus for Europe, Vinson for Antarctica, Kosciuszko for Australia, and finally Everest for Asia. 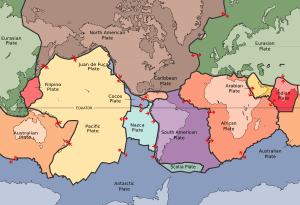 Using the largest tectonic plates, Europe and Asia could be grouped as Eurasia, and the very large Pacific plate would have Mauna Kea as its highest mountain. Puncak Jaya is actually on the Maoke Plate, which is usually grouped with the larger Australian plate. If not, then Mount Kosciuszko would likely revert to being the highest of that plate (see also Australasia). 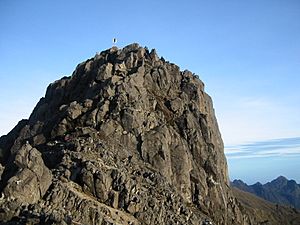 The highest mountain on the Australian mainland is Mount Kosciuszko, 2,228 metres (7,310 ft) above sea level. However, the highest mountain in the Australian continent which includes Australia and New Guinea is Puncak Jaya, 4,884 m (16,024 ft) above sea level, in the Indonesian province of Papua on the island of New Guinea, which lies on the Australian continental shelf. Mount Kosciuszko is very easy to climb, being a four hour, grade 3 return walk from the nearest car park, while Puncak Jaya is classed as a mountaineering expedition.

Some sources claim Mount Wilhelm (4,509 m (14,793 ft)) in Papua New Guinea's Bismarck Range as the highest mountain in Australia, on account of Indonesia being part of Asia. (See List of Southeast Asian mountains, which includes Puncak Jaya and other mountains in Papua, Indonesia.) However, such a definition is political, not geophysical, and would mean that Papua changed continents in 1969.

In terms of Australia as a country, Mawson Peak (2,745 m (9,006 ft)) is higher than Kosciuszko; however, it is not located in Oceania, but on Heard island, a small island territory in the southern Indian Ocean. If excluding the island of New Guinea, then Mount Cook in the South Island of New Zealand is the highest mountain in Australasia at 3,724 m (12,218 ft). 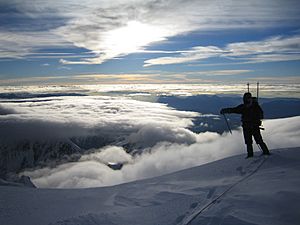 The generally accepted highest summit in Europe is Mount Elbrus (5,642 m or 18,510 ft) in the Caucasus, appearing on both the Bass and Messner lists. However, because the location of the boundary between Asia and Europe is not universally agreed upon, its inclusion in Europe is disputed: if the Kuma–Manych Depression is used as the geological border between Asia and Europe, the Caucasus and Elbrus lie wholly in Asia. If the Greater Caucasus watershed is used instead, Elbrus' peaks are wholly in Europe, albeit close to the border with Asia. Mont Blanc (4,810 m or 15,781 ft), lying on the border between France and Italy in the Graian Alps, is seen by some to be the highest mountain in Europe. 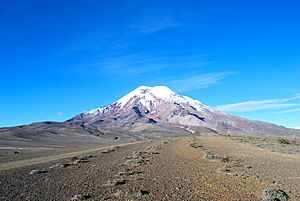 Chimborazo, probably the greatest of the North Andes plate and the farthest from the center of Earth

North and South America have Denali and Aconcagua, respectively. Looking again at plate tectonics, there is also the possibility of summiting the high points on the smaller plates.

The Bass and Messner lists

The first Seven Summits list as postulated by Bass (the Bass or Kosciusko list) chose the highest mountain of mainland Australia, Mount Kosciuszko (2,228 m or 7,310 ft), to represent the Australian continent's highest summit. Reinhold Messner postulated another list (the Messner or Carstensz list), replacing Mount Kosciuszko with Indonesia's Puncak Jaya, or Carstensz Pyramid (4,884 m or 16,024 ft). Neither the Bass nor the Messner list includes Mont Blanc. From a mountaineering point of view, the Messner list is the more challenging one. Climbing Carstensz Pyramid has the character of an expedition, whereas the ascent of Kosciuszko is an easy hike. Indeed, Patrick Morrow used this argument to defend his choice to adhere to the Messner list, "Being a climber first and a collector second, I felt strongly that Carstensz Pyramid, the highest mountain in Australasia ... was a true mountaineer’s objective."

All content from Kiddle encyclopedia articles (including the article images and facts) can be freely used under Attribution-ShareAlike license, unless stated otherwise. Cite this article:
Seven Summits Facts for Kids. Kiddle Encyclopedia.