Mount Kosciuszko is the highest mountain in Australia. The mountain is 2,228 m (7,310 ft) above sea level. The mountain is in the south east corner of New South Wales, where it is part of the Great Dividing Range. The Indigenous Australians called the whole mountain Tar-gan-gil. The first European to discover the mountain was the Polish explorer, Count Paul Strzelecki in 1840. He named it Kosciuszko after the Polish patriot, Thaddeus Kosciuszko (1746 - 1817). 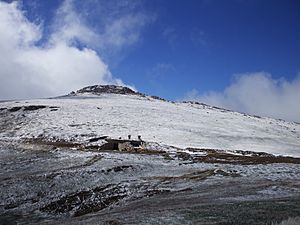 Mount Koscuiszko is Australia's highest mountain. Like many of Australia's highest peaks, Mount Kosciuszko is not particularly difficult to climb. There is a road to Charlotte Pass, from which it's an walk up a path to the summit. Anybody with a modest level of fitness should be able to walk it. Until 1976 it was possible to drive to Rawson Pass close to the summit. The walking track to Mount Kosciuszko from Charlotte Pass is in fact that road, which was closed to public motor vehicle access due to environmental concerns. This track is also used by cyclists as far as Rawson Pass, where they must leave their bicycles and continue onto the summit on foot.

The peak may also be approached from Thredbo, which is a shorter 6.5 kilometres (4 mi), and should take about 1 hour 45 minutes to reach the summit. It's not a difficult walk and is supported by a chairlift all-year round. From the top of the chairlift there is a raised mesh walkway to the summit to protect the native vegetation and prevent erosion. Both tracks meet at Rawson Pass for the final climb to the Kosciuszko summit. Australia's highest public toilet was built in 2007 at Rawson Pass at an altitude of 2,100 metres (6,900 ft).

All content from Kiddle encyclopedia articles (including the article images and facts) can be freely used under Attribution-ShareAlike license, unless stated otherwise. Cite this article:
Mount Kosciuszko Facts for Kids. Kiddle Encyclopedia.