Kraków is the second largest and one of the oldest cities in Poland, the city dates back to the 7th century. Kraków was the official capital of Poland until 1596 and has traditionally been one of the leading centres of Polish academic, economic, cultural and artistic life. Cited as one of Europe's most beautiful cities, its Old Town was declared a UNESCO World Heritage Site.

The city has grown from a Stone Age settlement to Poland's second most important city. It began as a hamlet on Wawel Hill and was already being reported as a busy trading centre of Central Europe in 965. With the establishment of new universities and cultural venues at the emergence of the Second Polish Republic in 1918 and throughout the 20th century, Kraków regained its role as a major national academic and artistic centre. It is a major attraction for both local and international tourists, attracting nearly 13 million visitors a year. 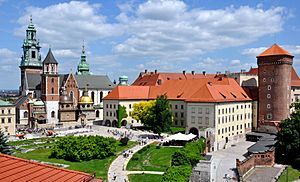 The city has a population of about 770,000, with approximately 8 million additional people living within a 100 km (62 mi) radius of its main square. Kraków and its surroundings suffer from Europe's dirtiest air pollution because of smog, caused by burning coal for heating, especially in winter.

After the invasion of Poland by Nazi Germany at the start of World War II, the newly defined Distrikt Krakau (Kraków District) became the capital of Germany's General Government. The Jewish population of the city was forced into a walled zone known as the Kraków Ghetto, from which they were sent to German extermination camps such as the nearby Auschwitz never to return, and the Nazi concentration camps like Płaszów. However, the city was spared from destruction and major bombing. 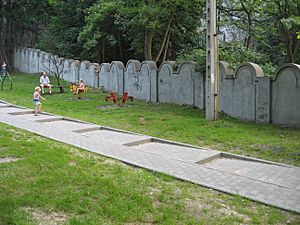 In 1978 UNESCO approved the first ever sites for its new World Heritage List, including the entire Old Town in inscribing Kraków's Historic Centre. Kraków is classified as a global city. Its extensive cultural heritage of Gothic, Renaissance and Baroque architecture includes the Wawel Cathedral and the Royal Castle on the banks of the Vistula, the St. Mary's Basilica, Saints Peter and Paul Church and the largest medieval market square in Europe, the Rynek Główny. The metropolitan city of Kraków is known as the city of churches. 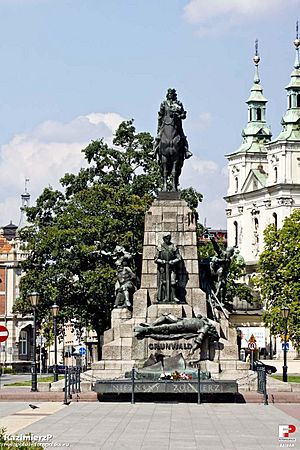 Matejko Square is one of the city's more important public spaces

There are five nature reserves in Kraków, with a combined area of ca. 48.6 hectares (120 acres). Due to their ecological value, these areas are legally protected. The western part of the city, along its northern and north-western side, borders an area of international significance known as the Jurassic Bielany-Tyniec refuge. The main motives for the protection of this area include plant and animal wildlife and the area's features and landscape.

There are about 40 parks in Kraków including dozens of gardens and forests. The Planty Park is the best-known park in Kraków. It was established between 1822 and 1830 in place of the old city walls, forming a green belt around the Old Town. It consists of a chain of smaller gardens designed in various styles and adorned with monuments. The Jordan Park founded in 1889 was the first public park of its kind in Europe. 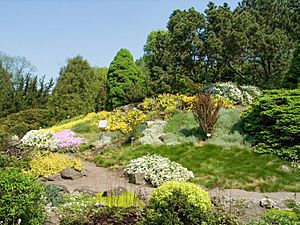 Kraków is home to Jagiellonian University, one of the oldest universities in the world and traditionally Poland's most reputable institution of higher learning.

In 2000, Kraków was named the European Capital of Culture. In 2013, Kraków was officially approved as a UNESCO City of Literature. The city hosted the World Youth Day in July 2016.

All content from Kiddle encyclopedia articles (including the article images and facts) can be freely used under Attribution-ShareAlike license, unless stated otherwise. Cite this article:
Kraków Facts for Kids. Kiddle Encyclopedia.