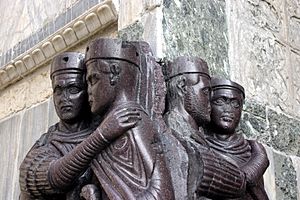 The Middle Ages were a period of about a thousand years in European history. They started around the year 476 CE when the Western Roman Empire ended, and continued until around the time Christopher Columbus arrived in the New World in 1492. The 'Middle Ages' are called this because it is the time between the fall of Imperial Rome and the beginning of the Early modern Europe. This period of time is also known as the Medieval Age, the Dark Ages (due to the lost technology of the Roman empire), or the Age of Faith (because of the rise of Christianity and Islam). When used narrowly, the term "Dark Ages" refer only to very early period, from 476 to 800 CE (when Charlemagne became Holy Roman Emperor). Because few could write, less is known about the Dark Ages than about earlier times.

The fall of the Roman Empire, and the invasions of barbarian tribes, devastated European towns and cities and their inhabitants. The Dark Ages are given this name because Europe was in disarray in comparison to the orderliness of classical antiquity and life was short and poor. Much of the knowledge that the Romans used (science, technology, medicine, and literature) was lost. The Dark Ages period was marked by mass migrations, wars and plagues. This lasted some 300 years until the development of feudalism partly diminished the continuous violence. Emperor Charlemagne was crowned in 800 CE, and he promoted order, education and civilization. Europe began to slowly regain what was lost during those centuries. The Late Middle Age was a tough period with Plague and wars that killed millions of people in Europe and Asia.

During the Middle Ages, Europe changed as the remains of the great Western Roman Empire slowly became independent, unified nation states such as England,Scotland, France (Which evolved from the realm of the Franks), Hungary, Spain, Portugal, Poland, Lithuania, Denmark and Norway. 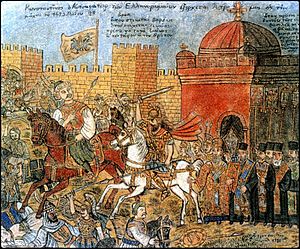