Burning incense in a temple in Beijing, China

Incense is aromatic biotic material which releases fragrant smoke when burned. The term refers to the material itself, rather than to the aroma that it produces. Incense is used for aesthetic reasons, and in therapy, meditation, and ceremony. It may also be used as a simple deodorant or insectifuge. 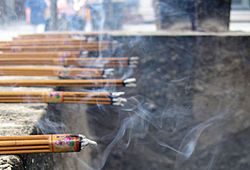 In Judaism, instructions for the use of incense were given in Exodus. (Eg Exodus 30:1). In Christianity, Christ is given myrrh and frankincense by the wise men. (Gospel of Matthew 2:11). The word incense comes from Latin for incendere meaning "to burn".

Incense is also used in Hindu rituals. The Babylonians used incense while offering prayers to divining oracles. Incense spread from there to Greece and Rome. 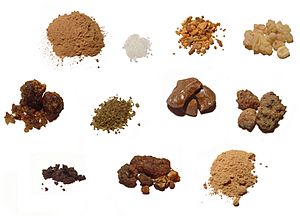 A variety of materials have been used in making incense. Historically there has been a preference for using locally available ingredients. For example, sage and cedar were used by the indigenous peoples of North America. Trading in incense materials comprised a major part of commerce along the Silk Road and other trade routes, one notably called the Incense Route.

Local knowledge and tools were extremely influential on the style, but methods were also influenced by migrations of foreigners, among them clergy and physicians who were both familiar with incense arts. 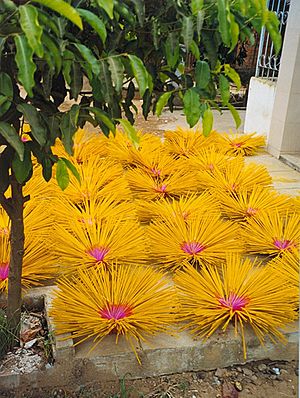 The raw materials are powdered and then mixed together with a binder to form a paste, which, for direct burning incense, are then cut and dried into pellets. Floral fragrances are the most common, but citrus such as lemon is not uncommon. The incense mixture is then rolled out into a slab approximately 1 cm thick and left until the slab has firmed. It is then cut into small cubes, coated with clay powder to prevent adhesion, and allowed to fully harden and dry. In Greece this rolled incense comes in either a pink or green colour denoting the fragrance, with pink being rose and green being jasmine.

Incense mixtures can be extruded or pressed into shapes. Small quantities of water are combined with the fragrance and incense base mixture and kneaded into a hard dough. The incense dough is then pressed into shaped forms to create cone and smaller coiled incense, or forced through a hydraulic press for solid stick incense. The formed incense is then trimmed and slowly dried.

All content from Kiddle encyclopedia articles (including the article images and facts) can be freely used under Attribution-ShareAlike license, unless stated otherwise. Cite this article:
Incense Facts for Kids. Kiddle Encyclopedia.