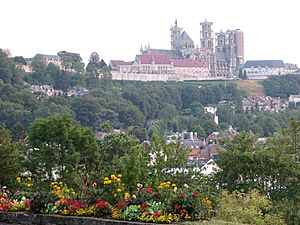 The cathedral seen from the north of the city.

The cathedral of Notre-Dame of Laon is a cathedral in Laon, Hauts-de-France, France. The current gothic cathedral was built between 1135 and 1270, on the site of an romanesque church which had been destroyed by a fire. It is one of the most important examples of the Gothic architecture of the 12th and 13th centuries. It is also among the first gothic cathedrals built in France. The cathedral has been compared to those of Saint-Étienne of Sens and Notre Dame of Paris.

All content from Kiddle encyclopedia articles (including the article images and facts) can be freely used under Attribution-ShareAlike license, unless stated otherwise. Cite this article:
Laon Cathedral Facts for Kids. Kiddle Encyclopedia.