Ascension of Jesus facts for kids 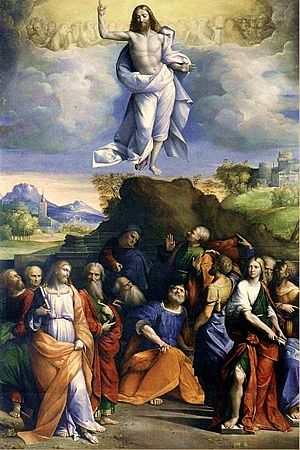 A painting of the Ascension of Jesus.

The ascension of Jesus is the Christian teaching that Christ physically departed from Earth by rising into Heaven, in the presence of eleven of his apostles. According to the New Testament narrative, the ascension occurred 40 days after the resurrection. In the Christian tradition, reflected in the major Christian creeds and confessional statements, God exalted Jesus after his death, rising him from the dead and taking him to Heaven, where Jesus took his seat at the right hand of God.

In Christian art, the ascending Jesus is often shown blessing an earthly group below him, signifying the entire Church. The Feast of the Ascension is celebrated on the 40th day of Easter, always a Thursday; the Orthodox tradition has a different calendar up to a month later than in the Western tradition, and while the Anglican Communion continues to observe the feast, many Protestant churches have abandoned the observance.

In Islam, Jesus was neither crucified nor raised from the dead, and according to the Qur’an, he was rather saved by God and raised to Heaven.

All content from Kiddle encyclopedia articles (including the article images and facts) can be freely used under Attribution-ShareAlike license, unless stated otherwise. Cite this article:
Ascension of Jesus Facts for Kids. Kiddle Encyclopedia.