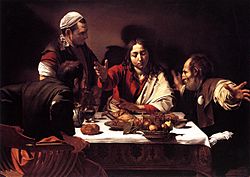 Christian art is an art form related to Christianity. There are a lot different definitions of it. Christian art is mainly defined by pieces that try to show or express the ideas of Christianity. Most Christian denominations or groups either use or have used art to some extent. Other groups, however, have do not like the idea of religious images, and there have been major periods of iconoclasm within Christianity. Images of Jesus and events from the Life of Christ are the most common subjects, and scenes from the Old Testament play a part in the art of most Christian groups. Images of the Virgin Mary and saints are less common in Protestant art than in Roman Catholic and Eastern Orthodox art.

All content from Kiddle encyclopedia articles (including the article images and facts) can be freely used under Attribution-ShareAlike license, unless stated otherwise. Cite this article:
Christian art Facts for Kids. Kiddle Encyclopedia.