The Frisians are a group of people of northwestern Europe, living in an area known as Frisia. They are mainly in the Dutch areas of Friesland and Groningen and, in Germany, East Frisia and North Frisia. They are said to be a tall, big-boned and light-haired people with a rich history and folklore. 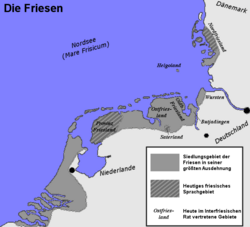 The Frisians were able to make an agreement with the Romans at the River Rhine in 28 CE. Sixteen years later they defeated the Romans under Tiberius at the Battle of Baduhennawood. The Frisii were known and respected by the Romans and were written about by several writers. Tacitus wrote about the Germanic peoples in 69 CE, describing the habits of the Germanic people, as well as listing a lot of Frisian groups by name. Of the many groups he listed, the Frisians are the only ones that have kept their old name.

The Frisians probably used boats. The North Sea from Britain to Eastern Denmark, was called Mare Frisia at that time. Small groups of Frisians settled the lands around them and their homes have been found in England, Scotland, Denmark, Germany, Belgium, France and The Netherlands.

Their land followed the edge of the North Sea from the mouth of the Rhine river up to that of the Ems. The Ems was the eastern edge of their land according to Ptolemy's Geographica.

In the 5th century, the Anglo-Saxons went through Frisian territory to invade Great Britain. A lot of Frisians moved with them. The Frisians who stayed in Europe moved into the lands where the Anglo-Saxons used to live.

All content from Kiddle encyclopedia articles (including the article images and facts) can be freely used under Attribution-ShareAlike license, unless stated otherwise. Cite this article:
Frisian people Facts for Kids. Kiddle Encyclopedia.