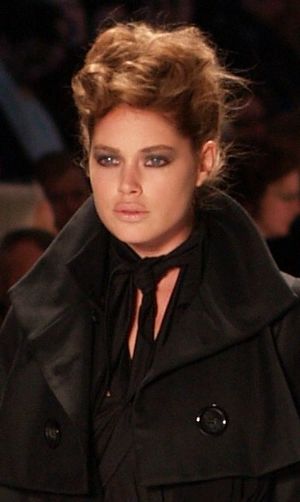 Doutzen Kroes (Pronounced Dow-tsen Croos) (born 23 January 1985 in Eastermar, Friesland) is a Dutch-Frisian model who has become internationally famous. In the Netherlands she is not only famous as a model, but also for her support for the Frisian language which is her first language. She is married and has two children.

After she had finished school Doutzen sent a few holiday photos to a model agency Paparazzi in Amsterdam. She hoped she would be able to earn a little extra money. To her amazement she was so successful that in two years she had become a top model.

In 2005, Kroes was selected as "Model of The Year" on Vogue.com by readers and was featured as a supermodel on the cover of the May 2007 issue. Along with several of these models, she appeared in the 2008 Pirelli calendar.

Doutzen appears in shows for Versace and Dolce & Gabbana and has a contract with the cosmetic firm L'Oréal. This contract made her the highest paid Dutch model ever. In November 2007 she became one of Victoria's Secret angels.

Doutzen’s first language is Frisian. She is very active in the campaign "Praat mar Frysk" ("Let’s speak Frisian") which helps to make the Frisian language popular. She earned a Frisian Press Prize for this work in December 2007.

On 28 April 2008, Madame Tussauds added a wax model of Doutzen to the exhibition. The skirt she is wearing is said to be her favourite skirt. It is designed by Roberto Cavalli.

Doutzen spends most of her time in her apartment in New York.

All content from Kiddle encyclopedia articles (including the article images and facts) can be freely used under Attribution-ShareAlike license, unless stated otherwise. Cite this article:
Doutzen Kroes Facts for Kids. Kiddle Encyclopedia.