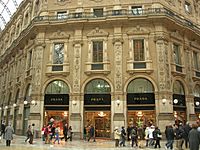 Prada is a famous Italian fashion company (also known as a "fashion label" or "fashion house") with shops and products around the world.

The company, originally named Prada Brothers, was started in 1913 by Mario Prada in Milan, Italy. In 1978, Mario gave his granddaughter Miuccia Prada the business, which still only sold leather goods at that time. Miuccia made the company bigger by giving it a more bohemian style.

Miu Miu is a second clothing, which is often simpler, and fits with the 'high' image of vintage items. Miu Miu is the nickname of Miuccia Prada when she was a child. After, Prada Sport 'Linea Rossa' was made.

Today, Prada is seen as one of the most important clothing designers in fashion.

Buying and Joining with other companies

After many other fashion companies started to buy or join with many other fashion companies, Prada tried to do the same thing. It went into debt so that it could buy Fendi in the early 1990s. Fendi was not making much money, and needed help. Prada could not help Fendi, so it sold it to LVMH. Prada is still in debt after buying Fendi. In 1999, the company bought "Church's", an English company that makes quality shoes. More recently 45% of "Church's" has been sold to Equinox.

Other big buys by Prada in the 1990s were Helmut Lang and Jil Sander. However, by 2006, Prada had sold both. Jil Sander was sold to 'Change Capital Partners', which is run by Luc Vandevelde (the chairman of Carrefour). Helmut Lang is now owned by Japanese fashion company 'Link Theory'.

Products made with other companies

In May 2007, Prada and mobile phone maker LG Electronics worked together to make the LG Prada (KE850) phone. The phones were sold for $800 each.

Prada has paid for several famous architects, the most famous are Rem Koolhaas and Herzog & de Meuron, to make their shops around the world.

In 2005, near the West Texas towns, Valentine and Marfa, two Scandinavian artists, Emily Milne and Zoe Brown, opened 'Prada Marfa', a sculpture of a Prada mini-boutique. The sculpture is on U.S. Highway 90 and is a long way from any other buildings. Prada helped pay for the building, which is 15 by 25-foot. The building does not actually sell clothes, but there are clothes in the window, as this is just for art. 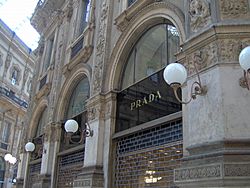 Small shops in the USA:

Big shops in the world:

All content from Kiddle encyclopedia articles (including the article images and facts) can be freely used under Attribution-ShareAlike license, unless stated otherwise. Cite this article:
Prada Facts for Kids. Kiddle Encyclopedia.