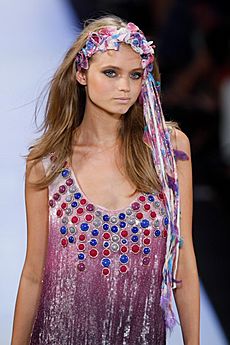 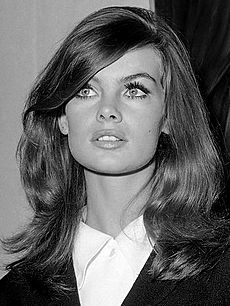 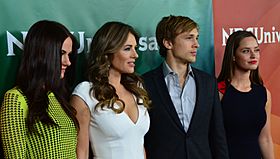 Actors as models: the cast of The Royals

A model is a person who has the job of using their body to pose for art, or to show fashion items, such as clothes or jewellery. Models often appear in advertising on television and in print media, for example newspapers and magazines, or on the web.

The first person described to work as a fashion model was Parisian shopgirl, Marie Vernet Worth. She was a 'house' model in 1852, for her fashion designer husband at the haute couture House of Worth.

There are many different types of models. Some models only use certain parts of their bodies. For example, a hand model is a person who only uses their hands. A hand model would be used to display certain items, for example rings and watches. These models are mostly used for advertisements.

Fashion models are used to sell clothing or cosmetics. People who make clothing will often use fashion models to wear the clothing they make at fashion shows. The models will walk up and down a raised section of floor called the catwalk or runway to show the clothing to other people. Some exclusive 'fashion houses' also use models to show off their dresses to clients. This idea was invented by Charles Worth.

Photographers use models for advertising, editorial and personal portfolio work. Work can involve news, fine art, fashion, fitness and glamour. Some photographers may ask models to express different moods or feeling for pictures.

Models can be all shapes and sizes, both men and women. Models do not have to be size zero, though most are young, good-looking females. There are specialist models for feet, hands and face, all of which may be photographed for various reasons. Some models are plus-size models and are of a larger build.

A supermodel is a highly paid model who usually has a worldwide reputation. The term supermodel began being used in the 1980s. Supermodels usually work for top fashion designers and famous clothing brands. They have multi-million dollar contracts. They also have endorsements and campaigns. They have branded themselves as household names and are recognized worldwide.

Fine art models are hired by photographers, painters, sculptors and other artists to pose for their art.

Models are frequently used during art classes, but are also employed by professional artists. The most common types of art created using models are figure drawing and painting, sculpture and photography. Although commercial motives dominate over aesthetics in advertising, its 'artwork' commonly employs models.

Throughout the history of Western art, drawing the human figure from life was considered the best way to develop the skill of drawing. In the art school classroom setting, there are no real limitations on who the model can be. In some cases, the model may pose with various props, one or more other models, animals etc., against real or artificial background, in natural or artificial light and so on.

Models typically work in one of two ways:

All content from Kiddle encyclopedia articles (including the article images and facts) can be freely used under Attribution-ShareAlike license, unless stated otherwise. Cite this article:
Model (person) Facts for Kids. Kiddle Encyclopedia.