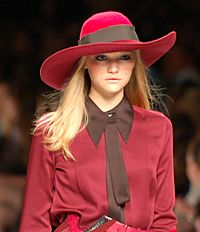 Gemma Louise Ward (born 3 November 1987) is an Australian supermodel and actress. She made her first Australian Fashion Week appearance at the age of 15. She later became the youngest model to appear on the cover of the American edition of Vogue. She has also been seen on the covers of both Teen Vogue and Time. Vogue Paris would later claim her as one of the top 30 models of the 2000s. Ward's acting credits include the movies The Black Balloon (2008), The Strangers (2008), Pirates of the Caribbean: On Stranger Tides (2011) and The Great Gatsby (2013).

Ward was born in Perth, Western Australia. Her father is an Australian and her mother is English. Her sister, Sophie Ward, is also a model.

All content from Kiddle encyclopedia articles (including the article images and facts) can be freely used under Attribution-ShareAlike license, unless stated otherwise. Cite this article:
Gemma Ward Facts for Kids. Kiddle Encyclopedia.