Hansel and Gretel facts for kids 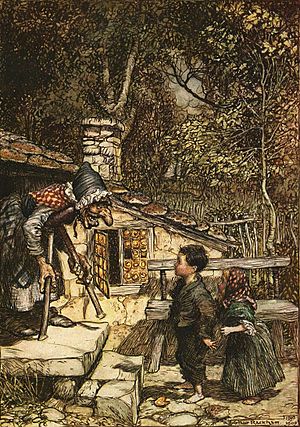 "Hansel and Gretel" (German: Hänsel und Grethel) is a fairy tale from Germany. The Brothers Grimm heard it from Dortchen Wild in Cassel and published it in their Children's and Household Tales in 1812. The Grimms revised the tale over the years. They gave the children names, changed the mother to a stepmother, and introduced Christian motifs. Their final version is dated 1857. The tale has been adapted to many media, most notably the opera Hänsel und Gretel (1893) by Engelbert Humperdinck. A stop-motion animated movie based on the opera was made in the 1950s.

Hansel and Gretel are a young brother and sister who learn their parents intend to abandon them in the forest. They find their way home by leaving a trail of pebbles. One day, however, their parents succeed. The children wander the forest and come upon a house made of cake and candy. It belongs to an old woman who makes the children prisoners. She intends to eat them and prepares the oven. Gretel outwits her. She pushes the old woman into the oven and slams the door.

All content from Kiddle encyclopedia articles (including the article images and facts) can be freely used under Attribution-ShareAlike license, unless stated otherwise. Cite this article:
Hansel and Gretel Facts for Kids. Kiddle Encyclopedia.