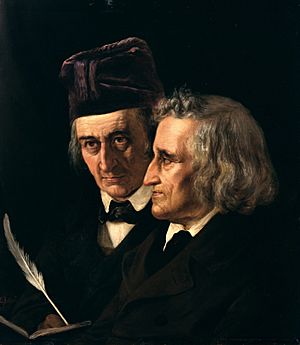 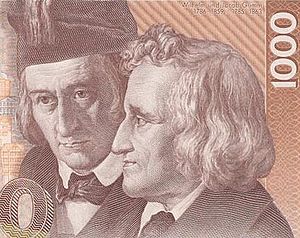 Image of the brothers on the 1000 Deutsche Mark bill

The Brothers Grimm (German: Die Brüder Grimm, also Gebrüder Grimm) were the brothers Jakob and Wilhelm Grimm. They were German academics and most famous for their collections of folktales and fairy tales, and for their work in linguistics.

The Grimm brothers both became linguists. They are the inventors of German philology. They also did other language-related work, like publishing one of the first grammar books for the German language.

They also wrote fairy tales, and collected the tales which people told them. They published a collection of fairy tales known as Grimms' Fairy Tales (Grimms Märchen).

All content from Kiddle encyclopedia articles (including the article images and facts) can be freely used under Attribution-ShareAlike license, unless stated otherwise. Cite this article:
Brothers Grimm Facts for Kids. Kiddle Encyclopedia.