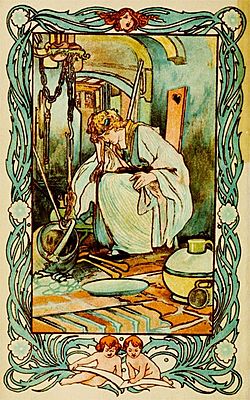 Cindarella illustration by Charles Robinson, 1900. From "Tales of Passed Times" with stories by Charles Perrault. 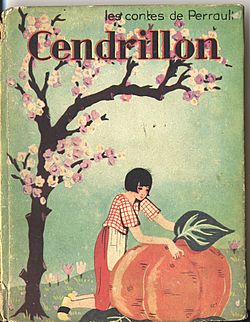 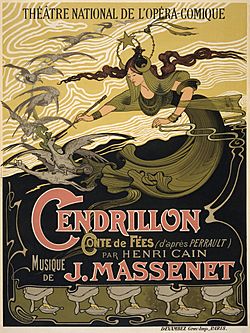 Cinderella is a popular fairy tale embodying a classic folk tale myth-element of unjust oppression/triumphant reward, of which there were hundreds of versions before modern times. The earliest version of the story originated in China around A.D. 860. It appeared in Miscellaneous Morsels from Youyang by Tuan Ch'eng-Shih, a book which dates from the Tang Dynasty. The best-known version was written by the French author Charles Perrault in 1697, based on a common folk tale earlier recorded by Giambattista Basile as La Gatta Cenerentola in 1634, but, especially in the English speaking world, the animated film from Walt Disney Productions, (see Cinderella (1950 film)) has become the standard contemporary version. The tale has been adapted to the stage, movies, television, and other media. 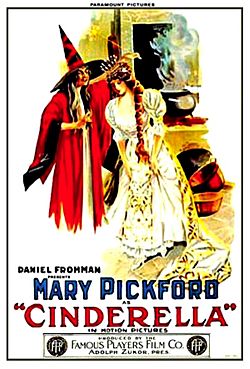 The familiar plot revolves around a woman of a rich family deprived of her rightful station in the family and given the cruel nickname "Cinderella" by her horrible stepmother and step-sister. Her father is completely under the thumb of his second wife in these stories. However, in some versions, especially the popular Disney film, the father has died. Forced into a life of domestic servitude, she was forced to tend the fireplace, hence the nickname. Cinderella accepts the help of an attendant spirit ("fairy godmother") who transforms her to attend a royal ball and attract the attention of the handsome prince. In some versions of the tale, there are three balls, although most modern versions only mention one. In the most familiar version of the story, told by Charles Perrault, Cinderella attends two balls.

Common western versions find Cinderella benefacted by a Fairy Godmother who turns a pumpkin into a coach, mice into a team of horses, lizards into footman, and a rat into a driver, before transforming Cinderella's clothing into a splendid gown and jewels, with fantastic slippers of some unusual material. In versions featuring a magical transformation, the magic all comes to an end at the final stroke of midnight. However, she loses track of the time and must flee the castle before her disguise vanishes. In her haste, she loses a glass slipper which the prince finds. He declares that he will marry only the girl whose petite foot fits into the slipper.

In all but one variant, Cinderella arrives and proves her identity by fitting into the slipper (in some cases she has kept the other, as in the Disney retelling). The evil stepsisters are sometimes punished for their deception, or in other cases forgiven, and made ladies-in-waiting with marriages to lesser lords.

The original Chinese version of the story emphasized that Cinderella (or Yeh-Shen; 葉限/叶限; Yè Xiàn as she was called) had the smallest feet in the land. Small feet were an important aspect of beauty in Chinese culture.

All content from Kiddle encyclopedia articles (including the article images and facts) can be freely used under Attribution-ShareAlike license, unless stated otherwise. Cite this article:
Cinderella Facts for Kids. Kiddle Encyclopedia.